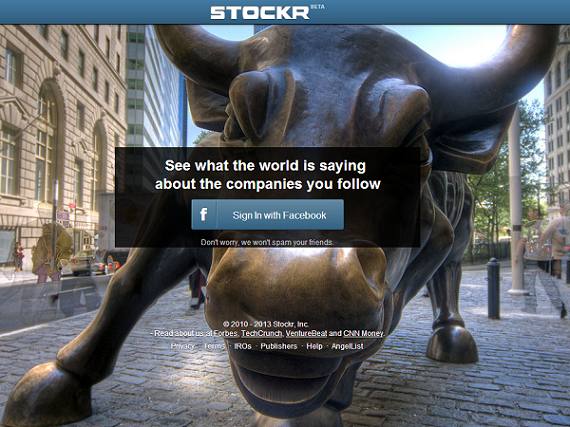 The rise of social media over the last decade, has led to the rise of what I would call, for lack of a better term, niche social networks. There are networks for everything, including cat lovers, antiquers, gamers, and even action figure collectors. Of course, Vator is a social network for entrepreneurs and investors.

If you're into it, you can probably bet there's a network out there dedicated to it.

One of the newest contenders is Stockr, which is trying to be the next-generation Yahoo Finance - one that's not just a feed of disconnected information, but one with a social component that allows readers (in this case investors) to interact with the company and other investors. If you know Yahoo Finance, you know it's one of the best ways to get information about public companies, from past earnings, to stock movements, to recent stock news and of course posts from observers/investors, such as a recent one titled: "Google is the best short."

One company trying to help shareholders get more interaction from companies and for companies to manage their investor relations with their shareholders better is Santa Monica-based Stockr, which was founded in 2010 by  Vinny Jindal, Brendon Crawford and Tim Symington.

Stockr recently won Vator Splash LA, after competing against 100 other startups. Clearly, the top-tier judges found Stockr to be a viable venture-backed business.

"I found two things intriguing about Stockr.  First, having people identify themselves in order to comment will eliminate the vast majority of the noise and consequently, the most interesting, valid comments will become visible," Jed Katz told me. Katz is a Managing Director at Javelin Venture Partners, and one of the Judges at the event.

"Second, if Investor Relations departments of public companies are taking this seriously, and using it as a platform to communicate to people that follow their stock (following strict guidelines of course), then Stockr has a chance at becoming the preferred hangout for investors."

Since Stockr came out of beta six months ago, it has gotten some traction. The social network is now seeing 9,000 unique visitors a month, with 4,000 profiles having been creating. There are currently 21,000 company profiles on the site, though only 13 companies currently have the ability to post as themselves on their company pages, including CBS. In September 2012, the company closed a $1.5 million seed round from Personal Capital, The Doyle Investment Group, and Adam Townsend.

So what's the idea?

The idea behind Stockr is to connect investors with companies, and vice versa, in order to help the investors get introduced to experts in various fields who will advise them on how to invest, and also to help the companies who use the platform to reach a wider audience, Jindal said to me in an interview.

To give an example, Jindal pointed to the recent news that Zynga had announced a large round of layoffs, cutting 18% of its workforce.

On the investor side, those with money in Zynga stock may have a lot of questions, and concerns, about what this means for the future of their investment. They will probaly be wondering whether this news means it is a good time to get in, or if it may be time to get out. With Stockr, these investors have a place to go to get advice from others who may be in a similar situation, and some who may have expertise in the space.

On the other side, if Zynga were to have a profile on Stockr, it would then be able to get the this important information, which will obviously have an effect on its stockprice, to its investors in a quicker and easier way. Stockr curates information into a stream, which is comparable to a Facebook newsfeed. As soon as a company puts out news, it will immediately go onto the wall of any investor following the company.

There is also a feature called Company Pulse, which will curate new posts about the companies that user is following.

Social media, said Jindal, provides the best technology to manage getting information out for a company that might have hundred of thousands of shareholders.

"There is a strong incentive to get on board," he said. "We are the only platform that is consistent with how Investor Relations disemminates information."

There are some other companies out there, such as StockTwits and Finif, which both offer similar services to Stockr, along with old fashioned message boards. Jindal says that he does not really consider any of them to be in competition with Stockr, as they are all missing some of the pieces that elevate Stockr.

There are big difference between Stockr and StockTwits, Jindal said, namely that posts on StockTwits can only be 140 characters long.

"That puts a limit on what you can say, and how you can make your case for why a company is interesting," said Jindal. "It does not allow you to speak your full mind, and say everything you need to say."

Stockr, on the other hand, has no character limit. But the other big difference is that StockTwits users are allowed to be anonymous, which is exactly the opposite of Stockr.

In fact, one of the biggest selling points on Stockr is that its member’s profiles are linked to their Facebook and LinkedIn profiles, in order to verify the person's identity.

Of course, it helps investors to know that the person giving them financial advice is actually an expert, but there is also al additional benefit that Jindal emphasized: it also fosters better interactions among members.

When it comes to message boards, there is no identification, meaning that there is also nothing to protect, and no way to grow a reputation by using them. Essentially, nothing is at stake. But with Stockr, that person's identity is key to getting others on the site to listen to them.

"Authentification helps create real thoughts and relationships," according to Jindal. "When people are being their authentic self they tend to act more rationally. When their reputation is on the line, people are more sensitive, and they will behave in a way that enhances that reputation."

In addition, he said, there are many users on Stockr who are experts in certain industries, and who do not make a living off of their knowledge. And so they can use Stockr to show off their expertise and gain recognition for it.

"There is a certain amount of gratification that comes with being followed and being able to help professionally," Jindal told me. "Stockr users can build a level of expertise, are given an audience that respects their abilities and allows them to be appreciated for their work."

Stockr is not the only one to require authentification: other services also have an application process, in order to prove that those posting are real investors. But Jindal also calls these processes "hurdles" that ultimately limit the amount of people who can be a part of the conversation.

Stockr can draw from the largest pool, without any of these same hurdles to be a member of the community. And so experts are allowed to emerge with the "largest possible scale and community," which then creates a "higher level of conversation."

What Stockr really wants to do is to get public companies to own their profiles. In many ways, it's a good way for an Investor Relations manager to interact with shareholders.

The benefit for a company to be on Stockr is that it gives them a platform to get their news out to their investors more effectively, thereby keeping them in the loop and stopping their investors from feeling "disenfranchised."

"The idea behind investor relations is to keep investors educated," he said, "Currently that is done through e-mail, phone calls or posts on websites, all of which are highly impersonal."

These companies can't "form real relationships" in this way and Stockr is the only "investor specific" website that can help them communicate directly with shareholders.

"The more communication there is the tighter the bond, and the more willing an investor will be to stick with a company," according to Jindal. "It helps the company create good will with investors which can help maintain its stock price."

Stockr is also helped by a recent ruling from the SEC, which allows publically traded companies to announce key information via social media, as long as the company also informs investors at to which social media will be used to disseminate that information. And Jindal sees Stockr as a valuable resource for companies both large and small to reach a wider range of investors.

So larger companies, like CBS, can get that information out more easily to a large number of their investors, he said.

For example, CBS chose Stockr to recap their latest earnings call.  It then tweeted a link back to the conversation on Stockr, preferring to engage shareholders in a more robust discussion than Twitter allows.

There are also benefits for smaller companies to use Stockr as well, such as Aeolus Pharmacuticals, another one of the companies currently on Stockr. It is a company that is not typically covered by analysts, and so Stockr can be a more cost effective way to get their information out than putting out a press release every day, which will drive up costs.

"They have the opportunity to talk about themselves on a social media platform," said Jindal. "They can better advise their investors, who will then be better engaged and less inclined to sell."

The ultimate goal for Stockr is to be a platform that benefits both investors and companies.

"Our mission it to help individuals discover and vet investment ideas and to also help companies reach a wider audience of investors," Jindal said.

Stockr charges companies a flat fee of $595 a month to use the service.

If Stockr can become the go-to place for investor relations, there is a big market opportunity in this space.

There are over 90 million people seeking stock information and guidance online monthly. And there are more than one million retail trades made every day, and over 70% of retail investors get trading ideas from their personal network.

"Investor relations is a $6 billion industry and we help drive demand, and bring value to both the company and the investor by opening a new channel of dialogue," said Jindal.

The company, so far, has done no marketing, instead using its time to focus on "learing a lot about what users want," in order to "build a better fit product."

The company will also be relying on word of mouth from CFOs and other executives, who have already been putting links to Stockr in their e-mail signatures, as well as from the companies it has signed up to tell their investors that Stockr is the best place to find information about the company, as well as to get their questions answered.

To find more first-hand info about Stockr from Jindal himself, follow him here: vator.co/stockr

In the profile, you'll see an expansive Q&A Jindal provided that gives you more insight into what Stockr is up to.

Described by Forbes as "Bloomberg for the masses," Stockr is a social media platform for the stock market.  By combining market data and news with two pillars of scalable networks like Facebook and LinkedIn -- authentic identity and good social technologies -- Stockr is transforming the way individual investors, industry experts and public companies connect and share what’s moving the markets.

No other platform provides market data and modern social tools: 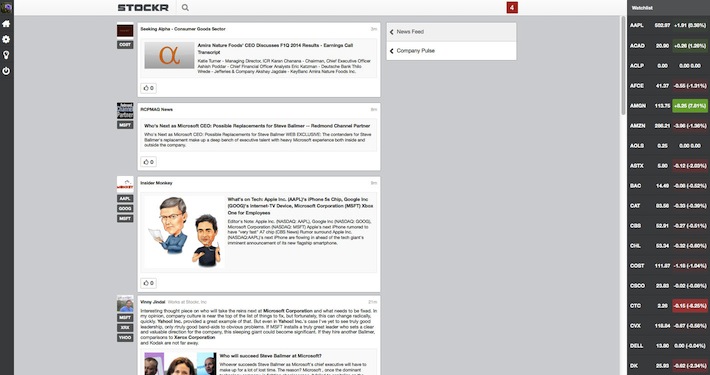 Stockr is building a community of bona fide Wall St. and industry experts, leading to information sharing and content never before available to most investors: 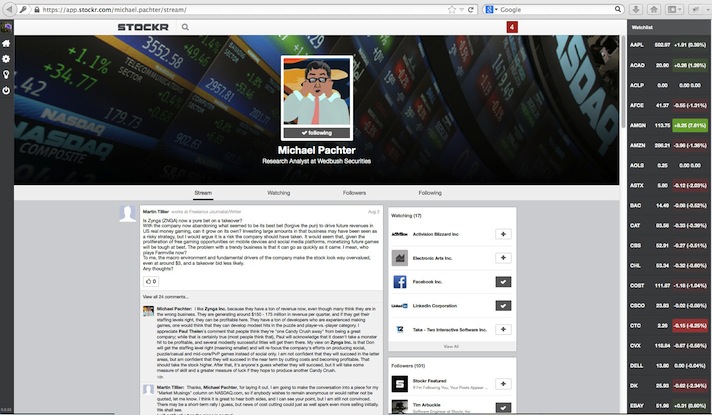 Companies like $NTWK are now paying Stockr to publish and communicate directly with the market: 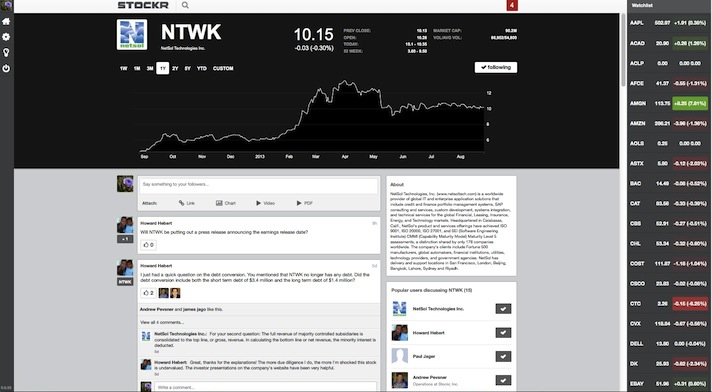 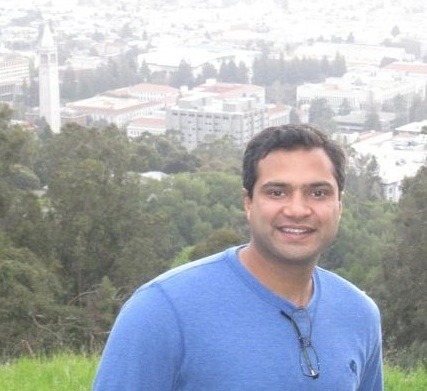 CEO and co-founder of @Stockr. 10 years of buy-side and sell-side equity research before becoming an entrepreneur. 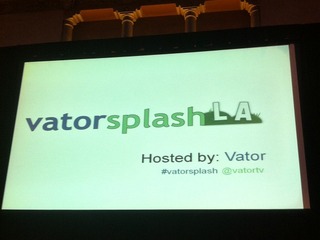 The winner of Vator Splash LA is Stockr!