While 57% would use on themselves, only 46% would let their kids get in one 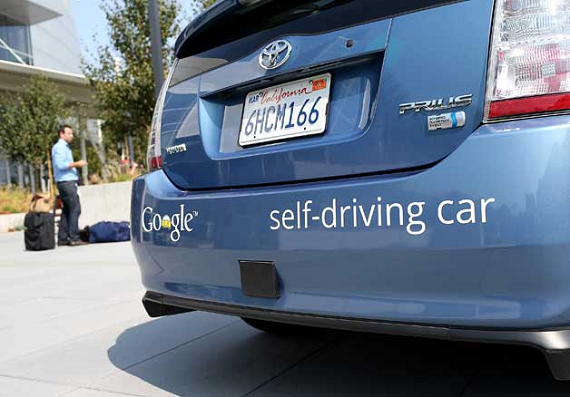 A few months ago I wrote about some of the most interesting gadgets to come out of the Internet of Things, a network of devices that are connected via sensors to maximize the potential of each object. One new invention that caught my eye was the driverless car.

For those who can't afford a limo driver, the idea of being able to get into a car without needing to do anything is pretty cool. People take subways and never really see the driver. So being transported without having to be in control is something we can become pretty familiar with. That said, subways and limos have drivers!

So you'd think that getting into a car that, essentially, has a mind of its own would scare most people away, at least at first.

But people the majority of people seem to already be comfortable with the idea, according to a report from Cisco released Tuesday.

In a survey of more than 1,500 consumers across 10 countries, Cisco found that 57% said that they would be likely to use a driverless car, even one "controlled entirely by technology that does not require a human driver."

The study covered three age groups: 18-29, 30-49 and 50+, with each category being equally represented with 33%, a Cisco spokesperson told VatorNews. All of those surveyed were either full-time students, full-time employed or retired, and the study did not include any person who would be considered "jobless."

When broken down by country, most of them were still warm to the idea. The most receptive, by far, is Brazil where a whopping 95% said they would use a driverless car. The majority of respondants in India, China, the United States, Russia and Canada also said they would use one.

Those surveyed in France, the United Kingdom and Germany were all more hesistant, and the idea was met with outright resistance by Japan, where only 28% said they would consider using the device. 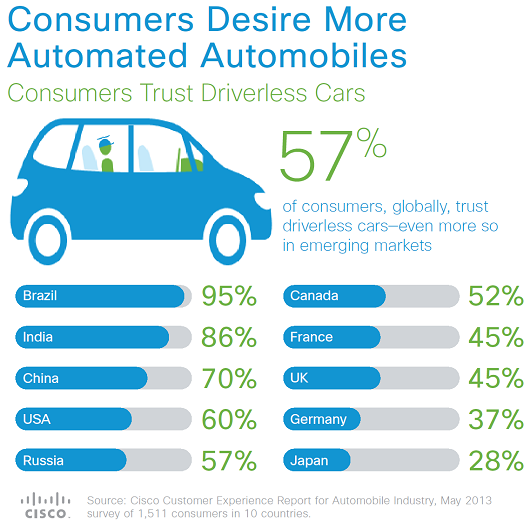 Interestingly, while people are willing to use the device themselve, they do not consider it safe enough for their children.

When asked if they would let their kids get into a driverless car, support dropped by over 10% to 46% saying that they would. Only 6% of parents in Japan, France, and Germany said yes to the idea.

With people very quickly getting on board with the idea, how close are we to actually having this technology in our lived? Closer than you might think.

it has already been successfully tested by a company called Velodyne, which had a Google car drive itself from 300,000 miles, from San Francisco to Las Vegas, without getting into a single accident.

Last week, Tesla co-founder Elon Musk said, in an interview with Bloomberg, that the company was considering adding driverless technology to its vehicles. Tesla has already been in talks with Google, which has developed its own technology.

Musk, however, wants Tesla's self-driving technology to be based on cameras instead of lasers.

“I think Tesla will most likely develop its own autopilot system for the car, as I think it should be camera-based, not Lidar-based,” Musk told Bloomberg. “However, it is also possible that we do something jointly with Google.”

The possiblities for the driverless car are endless. Lets say that you drive to a bar, get too drunk to drive and need to take a cab home. With this technology, you could send your car home and not have to leave it sitting for hours. Or if you are moving cross country, you could have the car drive itself to meet you when you get to your new home.

Personally, I'm not sure how comfortable I feel about getting in one, at least not right away. Technology is often buggy and unreliable for at least the first few years. And while it is one thing to have a phone with bad reception, or a tablet that takes bad pictures, it is another to essentially be putting your life in the hands of a machine that you're not 100% sure you can trust.