Wednesday, January 18 will see a 24-hour blackout from the Web's encyclopedia 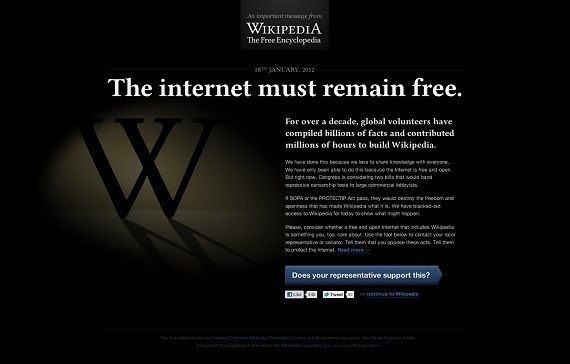 It's official. Wikipedia will join Reddit in their site blackout Wednesday in protest of the Stop Online Piracy Act, and the Protect IP Act, so says Wikipedia CEO Jimmy Wales via his Twitter. Wikipedia's blackout will be for 24 hours, from January 18, Midnight EST, to January 19 Midnight EST, while Reddit's will be 12 hours, January 18 from 8AM EST to 8PM EST.

Other sites who have RSVPed to the blackout Wednesday, include BoingBoing, Mozilla, the Cheezburger network, MoveOn, WordPress, and others. Reddit had announced on January 10 their intention to stage a site blackout, and Wales voiced his support soon after, saying it would be put to a vote among the Wikipedia community.

After making the announcement, Wales answered questions on his Twitter Monday afternoon. As Wales Tweeted, more details emerged, including that the blackout will only affect Wikipedia's English site, en.wikipedia.org, while the sites for other language willl self-determine their own involvement.

Also, the blacked-out Wikipedia pages will link to messages talking about what the protest is about, and why SOPA and PIPA are so dangerous. Wales indicated that exact wording of this message had not yet been determined, and that up to 100 million people would see their intended anti-SOPA/PIPA message.

Reddit's blackout protest was originally intended to happen at the same time that Rep. Darrell E. Issa, a SOPA/PIPA opponent, addressed the House of Representatives, though the time for that hearing has been changed after House Majority Leader Rep. Eric Cantor assured Rep. Issa that the bill would not be brought to the floor until "a real consensus" was made, about some of the bill's finer points.

The backlash of the Web community concerning several of these finer points, as well as a statement from the Obama administration decrying the bill, have given SOPA's and PIPA's original authors pause. Rep. Lamar Smith, who wrote SOPA, and Sen. Patrick Leahy, the writer of PIPA, have each called for a delay of Congressional hearings on the bills.

The issue most specifically cited by the White House's statement, and the point on which most critics of the bills have been most vocal in their protest, is the provision to allow the US Government and copyright holders to file court orders for the blocking of Domain Name Systems (DNS) of all websites associated with pirating or counterfeiting copyrighted property.

Most critics of SOPA and PIPA believe this provision would cripple the Web as it currently functions. And despite that Congress has heeded the White House's statement and has elected to temporarily postpone hearings on SOPA and PIPA, Wales indicated that the bills are still a threat to the Web as we know it.

"We have no indication that SOPA is off the table. PIPA is still alive and kicking. We need to send Washington and BIG message," Tweeted Wales. As stated in previous SOPA/PIPA-relevant stories, VatorNews will be joining with Reddit, Wikipedia, and the others in this protest by reporting only minimal news on Wednesday.