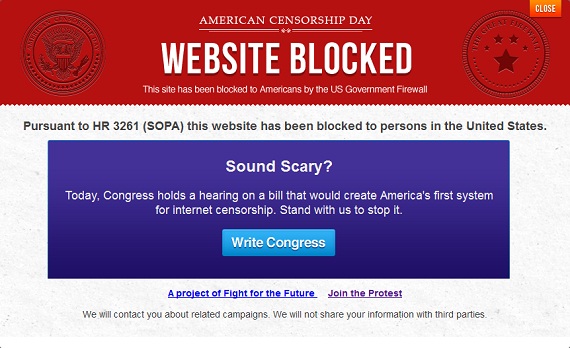 The fight surrounding the Stop Online Piracy Act (SOPA) is getting more heated as at least one major site may go black in protest of the stringent, possibly Internet-crippling anti-piracy legislative action currently being debated in congress.

Wikipedia indicated Wednesday that it might also join Reddit in its bold move to shut down for 12 hours in protest of SOPA.

"I'm all in favor of it, and I think it would be great if we could act quickly to coordinate with Reddit," said CEO Jimmy Wales, on his personal Wiki. "I'd like to talk to our government affairs advisor to see if they agree on this as useful timing," continued Wales. "But assuming that's a greenlight, I think that matching what Reddit does (but in our own way of course) per the emerging consensus on how to do it, is a good idea."

Wikipedia's move follows Reddit's recent decision to shut down its site on January 18th, from 8am–8pm EST.  The U.S. House of Representatives is currently on winter break and discussion of SOPA will resume in the House Judiciary Committee when it reconvenes, with hearings to begin "early [this] year."

Virtually every notable site on the Web -- including Twitter, Google, Reddit, Kickstarter, Tumblr, Mozilla, Yahoo, AOL, eBay, Zynga, and Facebook -- has come out against SOPA. Certain corporations whose interests lie with the bill, like Viacom and NBC, have perhaps understandably voiced their support of it.

But the overwhelming majority of people who like the Internet, and who want it to stay the way we've all come to know and love, are very, very against this measure. In spite of light coverage of SOPA in mainstream media, politicans in support of the bill, like Lamar Smith (R-TX) who was the one to propose, are already experiencing backlash from their constituencies.

Domain registry Go Daddy was one of the few prominent sites to support SOPA, and the backlashagainst it has also been considerable. Perhaps the most ringing of these voices of protest, regarding Go Daddy's SOPA-support, was made by Cheezburger Network CEO Ben Huh, who vowed to "move the 1,000 domains off of [Go Daddy] unless they drop their support."

Go Daddy reversed their position and joined those who opposed the bill a short time after, but not before losing a lot of business first.

And speaking of the kind of anti-SOPA action that hits the supporters where it hurts, Reddit is calling out those sites that have expressed their opposition to SOPA to follow them and black out next week. Some have (rightly) claimed that Reddit's black-out, while admirable, will likely not affect Internet users who are not already on the anti-SOPA side of things.

The blackouts that would really hit the pro-SOPA lobby where it hurts, and bring huge awareness to what SOPA will really do to the Internet, are those sites that much of America uses every day, Google, Facebook, and Twitter.

And for what it's worth, VatorNews will participate with Reddit's blackout by providing only minimal news coverage on Wednesday, January 18. To email your House Representative about SOPA, click here.