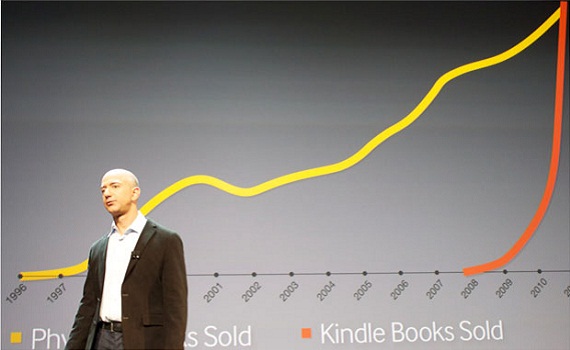 Ebook sales are expected to explode in the next few years.

Folks, that's a lot of eBooks. To put it in perspective, May 2011 saw the fateful moment when the sale of eBooks on Amazon actually surpassed the sale of physical books, which is huge, considering the significance of Amazon as a bookseller. Amazon CEO Jeff Bezos demonstrated the trend of eBook sales on one slide -- pictured above -- during his recent presentation of the new Kindle.

This report comes hot on the heels of Amazon announcing the addition of  some 16k Italian-language and 22k Spanish language eBook titles to their library, rounding out their total number of ebooks at over 950k. This doesn't include digital magazines, newspapers, and blogs, which pushes the Amazon library over the $1 million mark.

The Juniper report also states that this projection can be attributed to increased smartphone and tablet usage, as well as bookstore apps like iBookstore and Amazon's Kindle store. The growing demand for tablets will figure for 30% of all eBooks being downloaded on tablets.

Confusingly, the report also claims that smartphones will not figure prominently in the growing popularity of eBooks, except in Japan, where Manga comics are easily scanned via smartphones.

Another significant statistics set, regarding the growing popularity of eBooks, is that related to the use of electronic library materials. "More than two-thirds of libraries offer access to eBooks, up 12% from two years ago, up 30% since 2007," said a 2011 study on U.S. public libraries.

Link this to another 2011 study, "Public Libraries in the United States: Fiscal Year 2009", which collected data on what kind of materials are used in U.S. public libraries. "Although the volume of print materials has decreased over the past 10 years, collections overall continue to grow because of increases in the number of audio, video, and electronic book materials," states the executive summary of said study.

One might ask what significance national trends in library use has to the sale of eBooks on Amazon?Well, one survey conducted in August 2011 by Patron Profiles finds that library patrons make up a statistically significant portion of those who buy books, especially in terms of eBooks. Translation: libraries, and the way libraries are used, are a significant barometer for what direction book sales are headed, and, in fact, are a "powerful economic engine for the book business," according to the coverage of said survey by Publisher's Weekly.

This survey reports that over 50% of library patrons bought books that they had previously been exposed to in libraries, a much higher rate than recent surveys have shown for monetary conversion of music from sites like Spotify, incidentally.

What this library data amounts to is yet another confirmation of what everyone knows: Printed media is increasingly, inexorably going digital.