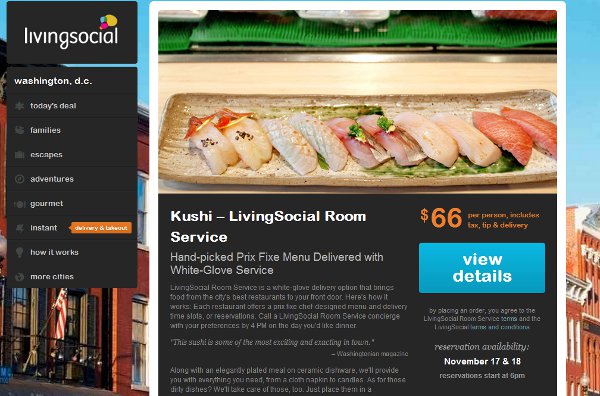 The new food delivery service even has a "LivingSocial Room Service" option, for more fancy customers, offering "white glove" service from several upscale D.C.-area restaurants. Though why one would patronize an upscale restaurant over the Internet is a bt of a mystery...

So far, the initiative has over 70 D.C.-local restaurants, including Wisey's, Chix, Sala Thai and Shawafel. And LivingSocial is sweetening the pot, marketing-wise, for vendors. One example given in LivingSocial's press release described a situation where a "Rasoi Daily Deal" offered on a Wednesday to D.C. customers would be redeemable through Thursday for LivingSocial Instant users.

Pricing varies depending on the restaurant.  For example, one Room Service deal for a meal from upscale sushi hotspot Kushi costs $66 per person, but the deal includes everything from ceramic dishware, cloth napkins, and candles to cleanup.  In true room service fashion, you simply leave your dirty dishes in a LivingSocial Room Service container outside your door and LivingSocial will come and pick them up the next day.

Other takeout and delivery deals aren't quite so pricey.  For example, you can order chicken kababs, naan, and kaju rolls for an easy $15, plus a $2 delivery fee.

"Our goal is to provide the most compelling and valuable services for members and restaurateurs alike," said CEO of LivingSocial, Tim O'Shaughnessy, in the company's Tuesday press release. "Integrating delivery into our Instant service gives LivingSocial's merchant partners the ability to reach customers both in their restaurants and the places they live and work.

Living is famous for their daily deals, where users can purchase vouchers for popular vendors at big discounts, provided they redeem said vouchers within a given 24-hour time frame. Users also have the option to invite their friends to buy the same daily deal, and if three friends do so, the original invitee gets the deal for free.

The company is rumored to be considering a $1 billion IPO which would value the company at $10-$15 billion. Two months back on September 13, LivingSocial made news for selling 600k deals in only a few hours, in conjunction with popular foodie market Whole Foods. 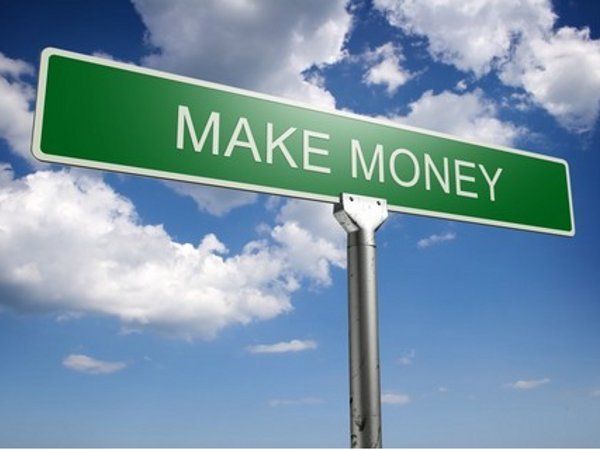 LivingSocial considering $1B IPO for $15B valuation