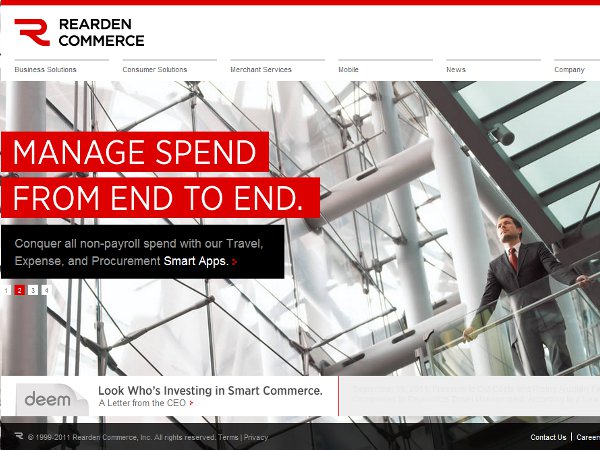 Rearden Commerce, creator of the Deem e-commerce platform, announced Wednesday that it has raised $133 million from existing investors JPMorgan Chase and American Express, as well as new investor Citi.  The new capital brings Rearden’s total raised to $353 million, for a valuation of $1.35 billion.

Launched in 2000, the company aims to make e-commerce smarter via its interoperable smart applications, which leverage big data, analytics, and semantics technology to make shopping online more relevant and direct.  Some 7,500 companies—ranging from large Fortune 50 and S&P 500 companies to SMBs—are using the Deem platform to connect with 1.2 million merchants.

Over the next several months, Rearden Commerce plans to launch next-generation Merchant Offer apps for both merchants and consumers.

"American Express, JPMorgan Chase and Citi each have meaningful business relationships with Rearden," Rearden Commerce SVP Pam Erickson tells me.  "As we evolve and expand these relationships, we are excited that companies of this caliber  see an investment in Rearden Commerce as an investment in the future of smart commerce.  The combination of their assets and Rearden’s Deem platform will deliver on the promise of real-time commerce."

In addition to the funding, Rearden also announced its expansion into the daily deal space with the acquisition of group-buying service HomeRun.com.  With the acquisition, Rearden is also acquiring HomeRun’s OfferEngine platform.

“Adding the expertise in social commerce and game mechanics from the HomeRun.com team, along with their pioneering work in self-service merchant tools, aims to instantly enhance the value of the Deem platform and ecosystem,” said Rearden Commerce CEO Patrick Grady, in a statement.  “Ultimately, we are seeking to fundamentally transform commerce by perfecting the interaction between buyers and sellers by correlating an individual’s preferences, location and circumstances with all the options available from merchants – and presenting just those that are relevant to that buyer.”

HomeRun.com has more than doubled its membership to 3 million subscribers since February 2011, and Rearden plans to combine HomeRun’s daily deal platform with Deem’s personalization capabilities via Deem’s Consumer Loyalty partners. The HomeRun.com team will be integrated into Rearden Commerce and HomeRun CEO Brad Brodigan will report to Patrick Grady as President of Merchant Services.

Rearden has been growing at a pretty quick clip, itself.  In the last year, the company has tripled its distribution channel, gaining access to more than 60 million consumers, while quadrupling its merchant network to some 1.2 million.

Rearden says it plans to use the new funds from this round for “high growth initiatives,” including acquisitions (like the acquisition of HomeRun.com), working capital, and debt repayment.