Carol Bartz had a non-disparagement clause, which she may have just violated

I have a soft spot in my heart for Carol Bartz.  Personally, I love her public tactlessness.  I don’t think it makes her unprofessional; it makes her unladylike, and that always pisses people off.  The comments she’s made in public, like telling former TechCrunch editor Michael Arrington to “fuck off,” always seem to generate a lot of heat, but they’re nothing compared to some of the language I’ve heard CEOs use at Vator Splash events.  Ngmoco CEO Neil Young went onstage last fall and told a room full of entrepreneurs, “don’t be a pussy."  (In a Scottish brogue, no less.)  And then he dropped a whole lot of F-bombs, as did Pandora’s Tim Westergren.

Big deal.  Bad words are funny.  But when Carol Bartz drops F-bombs, she ends up being the target of an endless stream of sexist remarks about Yahoo needing to "muzzle" her.

But now, some recent comments Bartz made about Yahoo following her abrupt firing may cost her $10 million, according to a report from Fortune, which cites a source who claims that Bartz had a non-disparagement clause in her contract.  That means that in her original contract, Bartz had agreed not to make any negative comments about Yahoo following a separation, otherwise the company could withhold a $10 million severance package.

So what were the comments that may have just cost her a hefty $10 million?  In an interview with Fortune published Thursday morning—her first interview since her termination—Bartz unloaded.  “These people fucked me over,” she said, referring to Yahoo’s board of directors.

She went on to call the board a bunch of “doofuses” and accused them of scapegoating her to avoid “being cast as the worst board in the country.”  Her accusation, in essence, boils down to what she calls the board’s impatience.   "They want revenue growth, even though they were told that we would not have revenue growth until 2012."

But more than that, Bartz claimed that it was the board’s actions that landed the company in the situation it’s in today: hemorrhaging ad dollars.  In her view, a deal that she negotiated with Microsoft two years ago—one that has Yahoo paying 12% of its search revenue to Microsoft but will benefit the company in the long run by offsetting costs—should have been done sooner.  The deal, she said, would grow Yahoo’s revenue eventually, but the board was too impatient after facing criticism for turning down a chance to sell Yahoo to Microsoft back in 2007.

"Now they're trying to show that they're not the doofuses that they are,” Bartz told Fortune.

I can’t imagine that Bartz simply forgot about the non-disparagement clause.  Could it be that she just said “fuck it”? 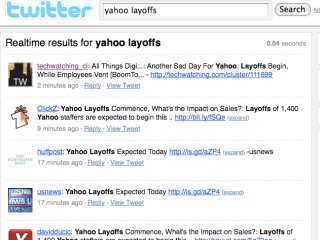