Pandora founder Tim Westergren just delivered the first keynote speech of the night at Vator Splash at Cafe du Nord in San Francisco. Jim Feuille of Crosslink Capital, Pandora's biggest investor, introduced Tim and outlined some of the reasons why Crosslink invested in Pandora. Five years ago, Pandora was known as Savage Beast, and provided music recommendations to major businesses like Target and Best Buy. Crosslink, at the time, was in the market for a music startup and it stumbled across Savage Beast, which was then a subscription based model meant to rival Sirius and XM.

Crosslink didn't think Pandora's subscription model was viable. Their trial groups insisted that they would never pay for it. So they switched to an ad-based model and the rest is history. Crosslink ended up investing $33 million in the company.

We actually got some pretty awesome "Tim" chanting. And then Feuille played the Ghostbuster's theme song "Who ya gonna call?"...with the implicit "Tim" in place of "Ghostbusters."

Here are some of the highlights of his speech:

--Prior to Pandora, Westergren had played in a number of bands, and he realized that there are some similarities between being in a rock band and being an entrepreneur: 1) you have no money, 2) it's creative, and 3) you're working in a creative environment.

--He had worked as a film composer before Pandora and he got good at predicting what a film director wanted before they asked.  He had the idea to codify the genomic approach to musical tastes and then pedaling it out to music businesses. They raised $1.5 million in March of 2000--"right before the shit hit the fan," he added (referring to the burst of the tech bubble).

--When he first created the Pandora prototype, they typed in Beatles and the first song that came up as the closest musicological connection was...the BeeGees.  But, what they realized was that when the BeeGees got started, they were actually a sort of Beatles copycat band and their music was actually closely aligned with Beatles, and Westergren and crew realized that they were onto something.

--The company plowed its way through tough times, charging up credit cards (Westergren maxed out 12), eating Ramen, (rumor has it that Westergren attempted to rally the troops to take a collective trip to Reno to gamble their way into more money). He owed $1.5 million in back salaries...ouch.

--He kept on trucking, pitching to close relatives, hedge funds, and everything in between. And then he got the funding he needed and was able to pay back salaries. Some people got $100K checks. (!!)

--The success of a company depends on its ability to embrace change. Pandora started out as a kiosk company and evolved to an ad-based direct-to-consumer Internet radio service.

--Anecdote: a while back he was in a suite in a Las Vegas hotel at 11 o'clock at night, and it was a reception for a big Wall Street investment bank. In one hand was a glass of red wine, in the other was an $80 truffle-infused kobe beef burger, and he thought, "What the f*ck am I doing here? At midnight the clock is going to strike and this is going to become a coke and a Big Mac, and I'm going to be in a corner sweating over my bills..."

Westergren then took some questions and answers from the audience. The first one was probably on everyone's mind--it was certainly on mine--how do you convince 50 people to work for free?

"At a certain point, you do what you're doing for the person next to you, not for yourself. You have to inspire people, you have to lead by example. We were the first ones to give up salary," Westergren explained.

I went ahead and asked the obvious: "Does Pandora plan to IPO this year?"

"We're not going to talk about it," said Westergren. "We planned to be a stand alone company from the beginning." 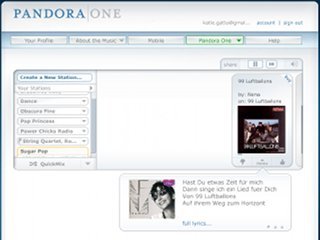 Why Elevation wants to invest in Pandora