Rdio, a music subscription service for the United States and Canada, announced Thursday that it has raised a $17.5 million round of financing from new investor Mangrove Capital Partners with participation from existing investors Janus Friis (Rdio co-founder), Atomico and Skype.

Despite what the name might suggest, Rdio is not another Internet radio service like Pandora or Last.fm, where you can’t choose exactly what you want to hear. On Rdio, users pay a monthly subscription fee ($5 for basic or $10 for premium) to gain complete, on-demand access to the service’s library of 100 percent licensed music. All four major labels are on board: EMI Music, Sony Music Entertainment, Universal Music Group and Warner Music Group.

Understanding that some people might be hesitant to (gasp!) pay for music, especially when you don’t actually get to own an MP3, Rdio offers a free seven-day trial. No credit card is required. The company hopes that people will get so hooked on the service’s vast collection and high-quality song files (256 kbps MP3), that they’ll have no choice but to sign up once the trial ends.

"We are changing the way we find and listen to music,” said Janus Friis, Rdio co-founder. “Anything and everything is instantly available from any computer and phone and easily shared with our friends. The days of expensive music downloads are coming to an end.”

There was a time when everyone was waiting for Spotify to forever change the music industry, but the startup has yet to make it stateside from its Swedish and UK origins. Meanwhile, customers are starting to turn to services like Rdio and MOG, a similar music subscription music service.

In fact, they are very similar. Both cost $5 per month for the basic service by which users can stream unlimited music to their computers. In addition, both offer $10 per month premium plans that also give users the ability to take songs with them and stream music to their mobile phones.

Rdio says the new funding will be used to expand to new platforms and regions as well as to hire more employees. 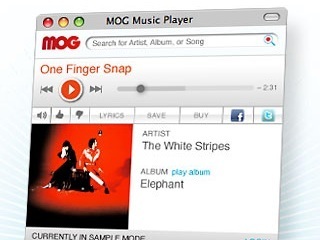