If I had a nickel for every time Twitter went down in 2009... But then again, I guess Twitter never cost me a nickel in the first place. Skype, however, does actually take in millions of dollars from paying customers who use the service to make international calls.

Acknowledging that millions of users were inconvenienced yesterday by Skype’s daylong downtime, newly-appointed CEO Tony Bates said Thursday that “loyal paying customers” would be compensated. The announcement was made less than an hour ago, and details of the compensation have yet to be revealed.

Starting early Wednesday morning, users started having difficulty logging into Skype, and the company began noticing far lower usage rates than normal for the day of week and time of day. Around 12 PM PST, the Skype team had officially recognized the problem multiple times and seemed to have come up with a solution, albeit a very technical one.

As of now, Skype should be working for the vast majority of users.

Giving compensation to users that pay to use Skype is very smart damage control for the company, especially since there’s no telling how many users flocked to other services during the downtime. With plenty of published stories like 8 Skype Alternatives to Get You Through the Outage, Skype probably gave a fair share of startups a decent amount of traffic. My mom freaked out when she couldn’t video conference with family in Nicaragua, so I told her to use the little-known video chat feature embedded in Gmail. Worked nicely.

People that use Skype for voice calls internationally, however, probably aren’t going anywhere, as long as Skype doesn’t repeat anything like yesterday’s outage.

I’m sure by now many of you have heard about the downtime which has affected Skype around the world. Our priority has been to stabilise the problem, and then to begin to restore access to Skype functionality.

It’s taken some time to do, but we’re making steady progress. To put things in perspective, there are now around 16.5 million people online on Skype around the world. This is about 80% of what we’d normally expect to see at this time of day.

We’ve stabilised Skype’s core functionality – IM, audio and video – but it will take longer for us to restore offline IM and group video calling. It’s been a tough 24 hours for many of you – and I’d like to thank you for your patience as we bring Skype back to normal.

I realise that it’s difficult to compensate you for not being able to talk to or see your friends, family or colleagues, but we’re planning to offer Skype Credit vouchers to all of our loyal paying customers to thank you for your continued support. 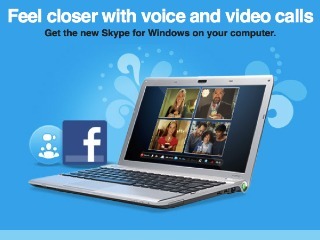 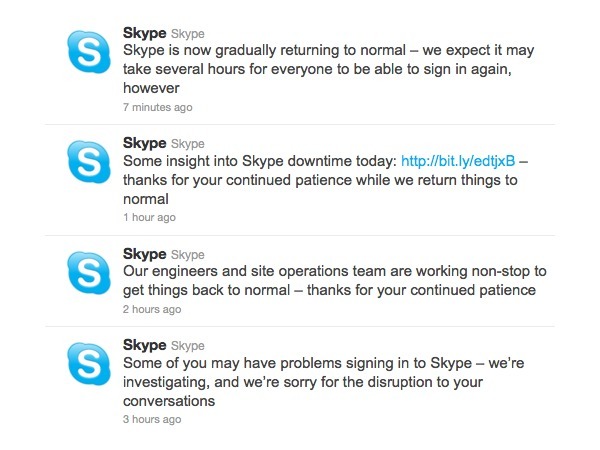