Interview with co-founder and CEO of Flipboard

I recently sat down with Mike McCue, co-founder and CEO of Flipboard, to talk about the iPad app that's been getting rave reviews.  Described as a "social magazine," Flipboard presents a user's Facebook and Twitter information into an interactive, magazine-like interface so that the user can follow friends and browse through media uploads, such as pictures, videos, and shared links to newspaper articles and websites.

According to McCue, people tend to use Flipboard at night, before bed, and usage has been impressive.  The iPad format is ideal for Flipboard, which will likely expand to other platforms in the future, but for now will stick with the iPad.

But is it the right time for Flipboard, when only 4% of American consumers own a tablet.  Yes, said Mike McCue, although initially the company threw around ideas for an HTML5 website or perhaps an iPhone app. But the tablet device was really ideal for Flipboard's unique magazine format.  "We got in at just the right moment in time, not too soon, not too late," said McCue, anticipating that Flipboard will grow along with the iPad adoption rate.

There may be a stand-alone website in the future, but the iPad format is so ideal for Flipboard that a standalone website would be a very different user interface.  The iPad platform, explained McCue, makes you, as a developer, want to push yourself and try something different.

Users can use Flipboard to catch up on their friends and read curated news, and right now it appears that usage is an even mix.  But why will users turn to Flipboard for their daily news when they can use any number of the plethora of personalized news aggregators like iCurrent MeeHive that they can customize to their interests?

Flipboard takes a different approach to the news by aggregating news that your friends curate, which means that instead of reading the New York Times on your iPad, you might follow Robert Scoble or Michael Arrington who will post content that you might be interested in. In the future, Flipboard will likely offer content based on users' usage patterns and preferences. 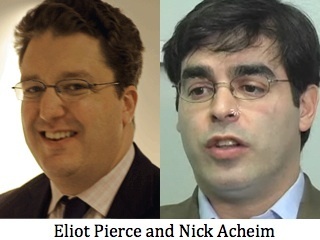 NYT's future on the iPad? Ask these men