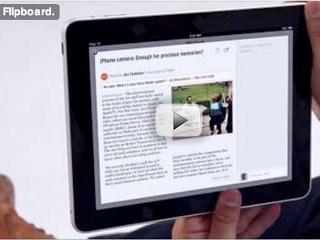 favorite gossip rag - only the subjects stimulating our curiosity would be ourselves.

Now, with Flipboard, that prognistication has become a reality as friends' photos and posts are laid out with white space and formatting that makes the experience exactly like viewing People magazine online, with one exception: my friends are the editors, photographers and/or the celebrities.

Flipboard, which received $10.5 million in funding from Kleiner Perkins and Index Ventures, is an iPad application that calls itself a "social magazine." It turns your Facebook and Twitter interface into a beautifully-laid out online publication.

Friend's photo entries appear prominently, much like an image on an online newspaper or magazine.

Short posts or Tweets stand out in their own little area, making even the simplest post look like poetry.

"Who wouldn't want to consume content like this?" said Mark Goldstein, CEO and founder of Loyalty Lab.  "Flipboard makes the most trivial things professionalized and more real... This will probably force people to be more careful about who and what and with whom they share."

Flipboard was founded by Mike McCue, whose last venture TellMe was sold for some $1 billion to Microsoft, and Evan Doll, a formger Apple engineer.

Thanks to Pierre-R Wolff for letting me check out his iPad and Facebook/Twitter accounts, and take pictures of his Facebook account on Flipboard.