On Friday I mocked recent “Glassgate” rumors that the iPhone 4 is breaking more often than previous iPhone versions.  It seems logical to say…yes, of course it’s breaking more often because the whole thing is made of glass!  Glass breaks!  But a new study conducted by SquareTrade, an extended warranty provider for consumer electronics and appliances, is finding that the rumors are, in fact, true.  According to the study, which was published Tuesday morning, the glass on the iPhone 4 is breaking 82% more than the iPhone 3GS four months in.

Tseng went on to outline the details of the study, which was conducted using a comparative sampling of 20,000 SquareTrade customers who have taken out warranties on their iPhone 4s and a sampling of 20,000 customers who have the iPhone 3GS.  The study found that iPhone 4 owners have reported 82% more damaged screens four months after the device’s release than owners of the iPhone 3GS.  Additionally, the reported accident rate for iPhone 4s is 68% higher than the iPhone 3GS.  Based on this rate, iPhone 4 users have an estimated 15.5% likelihood of experiencing damage to their iPhones within one year of purchase, compared to the iPhone 3GS, which has a 7.8% likelihood of being damaged within one year.

Tseng noted that iPhone 4 owners can reduce the likelihood of damaging their phones by using protective cases that cover the back.  But what about reports that it’s the cases, themselves, that are the problem?  Some are saying that bits of debris are getting caught between the case and the glass surface and causing damage that way.

“We’ve seen no conclusive evidence that this is the case,” said Tseng, adding that only one quarter of the accidents are being reported for the back of the phone.

What this means is the increase in reported accidents is not due to the fact that the iPhone 4 simply has more glass surface area, though that does make matters worse.  According to the report: “With just 4 months of data, it's clear that the iPhone 4 is significantly more prone to physical damage than its predecessor. The aluminosilicate glass seem to crack at least as often as the old glass, and there is now twice as much surface area to break.”

But the Apple website describes the glass as “the same type of glass used in the windshields of helicopters and high-speed trains.  Chemically strengthened to be 20 times stiffer and 30 times stronger than plastic, the glass is ultradurable and more scratch resistant than ever.” Looks like the door-to-door Aluminosilicate glass salesman hoodwinked Apple.

The device has been experiencing a number of problems since its release four months ago.  Most notably was “antennagate” and the frequency of dropped calls.  In June, Consumer Reports stated publicly that it could not recommend the iPhone 4 due to the number of reports of dropped calls.

But Tseng noted that SquareTrade has been studying the iPhone since it first appeared on the world stage back in 2007, and they’ve found that the iPhone is one of the most reliable devices on the market, with half the malfunction rate of the BlackBerry.  In the next two months, SquareTrade plans to conduct another comparative study of the failure rates of all smartphones.

Tseng doesn’t think this issue will cause any legal problems for Apple, which has been touting the iPhone 4’s glass as the strongest yet.  “It really is the responsibility of the consumer to take precautions to avoid damage,” he said, adding that users will also need to step back and accept the fact that the iPhone 4 is made out of glass.  So…it’s going to break. 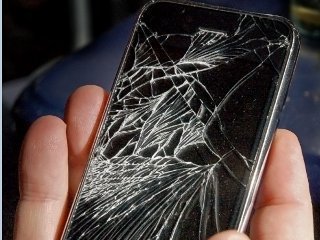