Apple announced on Monday that iPhone 4 sales topped 1.7 million, immediately securing the latest generation Apple phone in its place as king of the smartphone industry.

Hudson Square Research analyst Daniel Ernst noted that "no single smartphone model has been this successful."

That's not the only milestone though.

"This is the most successful product launch in Apple's history," said Steve Jobs, Apple's CEO. "Even so, we apologize to those customers who were turned away because we did not have enough supply."

Jobs was referring to a flurry of mix-ups, technical difficulties, and plain and simple stocking limitations that prevented some people from getting their new phone over launch weekend. Some customers who had actually completed order processes online were shocked to later receive emails stating their order had unexpectedly been canceled. Conversely, other customers managed to get their iPhones in the mail a day or two before the actual launch day, a change from traditional Apple proceedings.

The iPhone 4, the fourth iteration in a line of successful iPhone models, received its debut at WWDC three weeks ago. With grins from ear to ear, Jobs showed off the device's high-resolution "Retina Display," a gyroscope for more advanced motion-sensing applications, and a 5-megapixel camera with HD video editing capabilities. On top of everything, Apple introduced iPhone 4 to iPhone 4 video chatting with a new front-facing camera.

"It's amazing how the fourth iteration of a product could generate the longest lines and the strongest sales yet," said another analyst, Walter Piecyk of BTIG Research.

For comparison, the iPhone 3GS sold 1 million units in its first three days.

Indeed, it seems like with each new iteration of the iPhone, Apple pleases its current user base while continuing to dazzle the next-generation of users. 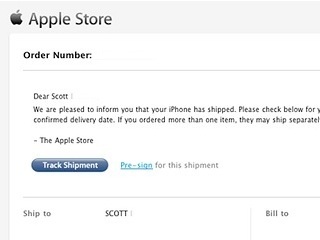