Oracle chief defends his tennis buddy against what looks like an unscrupulous HP board.

In a letter to the New York Times, Ellison let it be known that he has his friend’s back. “The H.P. board just made the worst personnel decision since the idiots on the Apple board fired Steve Jobs many years ago. That decision nearly destroyed Apple and would have if Steve hadn’t come back and saved them.”

It’s common knowledge that Hurd has done great things for HP, if greatness be measured in dollars, so let’s leave that aside.

The question of the hour is whether HP did the right thing in following the advice of its PR firm, APCO, by ditching Hurd.

Given all the information that has come to public light, the answer is a resounding no.

First of all, in the court of public opinion, Hurd needs to be cleared of all suspicion of sexual misconduct. The HP board has said an internal investigation found that Hurd DID NOT commit sexual harassment. Hurd’s accuser, Jodie Fisher, said she DID NOT have a sexual relationship and was saddened by Hurd’s resignation. Presumably the charge was related to a comment or gesture, which may or may not have happened and we we’ll most likely never know if it happened because the case was settled outside of court. In such a situation, it’s only fair to assume the best.

It is possible that Hurd’s accuser is a gold digger, and it would be cheaper for Hurd to settle than to drag out the case. To leave the public questioning Hurd’s marital fidelity without cause is hugely unjust, and HP has in effect done just that, because the official reason for ousting, which I’ll get to in a second, is so inane. The only independent investigation, conducted by HP itself, found Hurd not guilty of any sexual harassment. Upshot: as far as this writer is concerned, barring new revelations, Hurd is a faithful husband who treats his female business associates with respect.

That leaves us with the expense report falsification, the only reason cited by HP for ousting him. Here’re the facts: Fisher was hired to organize HP networking events. Apparently, Hurd dined with Fisher after those events, though his expense reports indicated he dined alone or with someone else. An NYT source close to Hurd said he did not fill out his own expense reports. Why a minor expense report discrepancy alone would be considered cause for getting the boot is a huge head-scratcher. Apparently, Hurd thought so too, and when the board brought it up, he balked and offered to compensate the board for the disputed funds, said to range between $1000 and $20,000. This leads every impartial observer to figure that the HP board really knew the relationship was improper, but didn’t want to say so publicly.

Except that may not be the case. HP’s board, according to NYT sources, were concerned about the PR mess that a public accusation of sexual harassment could mean for HP, regardless of how well founded it was. Gloria Allred, Fisher's media-savvy rockstar lawyer would have wreaked havok either way. If that was the determining factor, HP may have thrown Hurd under the bus, casting a shadow on his reputation, all official exoneration aside, in order to save itself.

Ellison may well have it right. “In losing Mark Hurd, the H.P. board failed to act in the best interest of H.P.’s employees, shareholders, customers and partners,” he wrote in his letter to the NYT. “The H.P. board admits that it fully investigated the sexual harassment claims against Mark and found them to be utterly false.”

Hurd is said to have described the situation as “surreal and bizarre.” Indeed it is, and unless there’s more to the story, HP appears guilty of smearing Hurd’s clean record in order to appear clean itself. 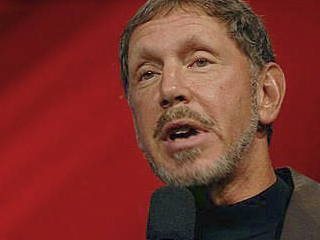