We are moving into the age of the smartphone, and Apple’s iPhone is blazing us through the transition.

As Apple continues its current trend of gobbling up the mobile phone market share, the latest report this week declares that by 2013 the creator of the iPhone will have surpassed mobile phone king Nokia. The data, revealed by analyst group Generator Research, says that the two companies will have matching market shares in the year 2011 with predictions that Apple will sell 77 million phones that year. The biggest claim is that in 2013, while iPhones should hold around 33% of the market, Nokia’s market share will be halved from 40% to 20%.

This report comes a week after an internal AT&T memo gushed about the “best-ever sales day” and “second-largest traffic day” achieved in AT&T retail stores on the June 19 launch of the iPhone 3G S. Similarly massive successes were reported on AT&T’s website, according to the memo posted on All Things Digital. In 2007, it took 74 days for Apple and AT&T to sell one million iPhones, whereas this year it took only three.

When powerful mobile devices like the iPhone become increasingly inexpensive, the market for low-cost, bottom-of-the-line phones—the kind Nokia makes a killing off of in developing countries—will gradually disappear. Already, Apple offers its bottom-tier iPhone for $99 with a 2-year AT&T contract, a highly competitive price tag.

Nokia realized too late that to hold on to its market share, it needed to evolve by creating a smartphone sophisticated enough to compete with the BlackBerry and iPhone. The release of both the touchscreen 5800 XpressMusic and Ovi Store for software trailed Apple’s corresponding products by over a year.

The only thing that can reverse this overall trend and prevent Apple’s toppling of Nokia would be a new smartphone with unmatched innovation and usability to best the iPhone’s. Nokia only has four more years to pull it off. 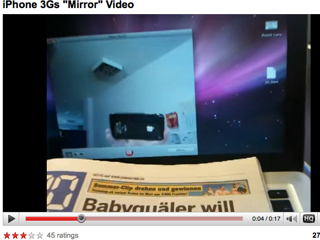