Since I'm a Mac user, I'm still waiting to test out Chrome. But not surprisingly, it's gotten wicked-fast adoption from all the PC users out there.
In the two weeks since Google Chrome launched, it appears about two million unique visitors have already signed up. More than 1.9 million unique visitors in the U.S. visited the "Thank You" page associated with Google Chrome, according to Nielsen Online, a service of the Nielsen Company. That's about 1.4% of all visitors in the U.S. Of those who visited that page, nearly three-quarters were male. Of the males, nearly 40% percent were between the ages of 35 and 49.
Additionally, Google Chrome was mentioned in nearly 1% of all online discussions the day after it launched. This is a "respectable slightly-more-than-half of what the highly anticipated iPhone 3G generated when it launched earlier this summer," said Jon Stewart, research director, technology and search, Nielsen Online.
Source: Nielsen Online, NetView Custom Analysis

Has Google Chrome got room for Improvement? 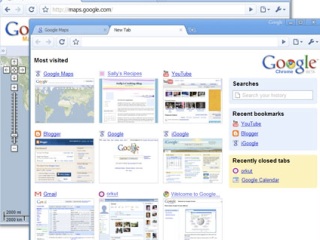