OneRiot, one of the forerunners of real-time search on the Web, announced Tuesday evening that it had already begun indexing publicly shared Facebook data.

At its f8 developer conference last week, Facebook opened the doors to user-shared content to third-party services via the Open Graph API and social plugins. One of the most important plugins, the Like button, has already found itself embedded all across the Web, under videos, next to news stories, and side-by-side literally any piece of content that a user might share with his or her friends back on Facebook.

Having previously only indexed links shared on Twitter, MySpace, Digg, and Delicious, in addition to links shared amongst the company's own panel, OneRiot is now probably very happy to start streaming any and all publicly shared content on the biggest social networking site in the world.

"Traditional search is based on a document-centric view of the web," writes Tobias Peggs, Vice President and General Manager at OneRiot. "Realtime search is based on social signals across the web right now. That’s a huge shift – and one that that delivers radically different search results for users [...] Now, with the addition of Facebook data, OneRiot delivers search results that reflect the pulse of a much, much wider social web."

As with any search results on OneRiot, a Facebook post will be labeled as such and will also include the name of the user who shared the content.

Unfortunately for Facebook, privacy advocates, along with four US senators, have already expressed sharp disapproval of some of Facebook's new features. Their arguments are not ill-founded. With Instant Personalization, for example, Facebook is giving pre-approved third-party sites, like Pandora, free access to user data without first asking the user to opt-in to the exchange. Critics are demanding that Facebook reorder their service so that the user must always opt-in first. 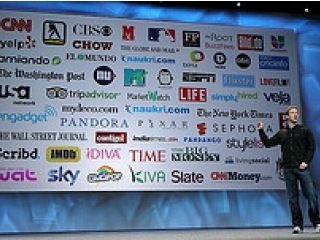