Things are looking up... 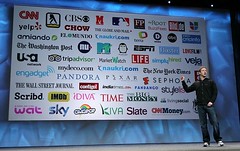 It’s been another big week in Silicon Valley. The annual Ad:Tech San Francisco Conference is wrapping up today after playing host to 12,000 visitors and a huge range of exhibitors anxious to show off the ways in which they’re innovating across traditional, online, search and mobile advertising.

At the same time, Facebook kicked off its Developers’ Conference, called F8, also in the Bay Area. Like Twitter’s conference last week, the gathering is for third-party developers of applications that live on Facebook itself and across its growing ecosystem. Founder Mark Zuckerberg (pictured above, at the opening of F8 on April 21, 2010) announced a stunning array of changes and new initiatives that will directly affect the nearly 500 million people who visit the site each month.

But wait, there’s more: Google, Apple and Yahoo!, all headquartered in the Bay Area, released their quarterly earnings reports this week. And what earnings they are:

Reading this, you might ask “What recession?” While Silicon Valley did see some impact from the Great Recession, which most economists believe is now over, it wasn’t as adversely impacted as many other sectors of the economy. And its rebound is pretty darn impressive.

Capitalizing on the robust return to growth of online display, search and mobile advertising–not to mention the massive adoption of smart gadgets like the iPhone and iPad–Facebook is moving aggressively to expand its ecosystem across much of the Web. In summary, Facebook’s new default is “globally social” – which is to say, it presumes all members of the social network want to be social not only on Facebook but wherever it may have extended its tentacles across the Web.

For instance, if you see a “Like” button next to an article on, say Huffington Post, and you click on that button, your endorsement of that article will appear in your news feed on Facebook for all your friends to see, comment on and share. That this button exists at all on HuffPo has to do with Facebook’s new Open Graph effort, which provides website publishers with simple tools to integrate Facebook features and functions directly into their own sites.

This new initiatives also means that the HuffPo will be more personalized to you – showing you, for instance, what your friends on Facebook previously read and shared on HuffPo.

Like Google’s search advertising engine, AdWords, Facebook will target ads to its users. But instead of using the words typed into a search query to dictate what sort of text-based ads to serve around search results, Facebook will target ads that are mostly text but also include a small graphic based on what users have declared about themselves in their profiles and news updates. It will also factor in your age, location, gender, education, and other demographic, psychographic and geographic considerations.

Facebook believes it can help advertisers more precisely deliver ads that are directly relevant to the person who sees them. Moreover, it’s hoping that because users see ads that pertain to their immediate needs, interests or desires, they’ll be more receptive to those messages. All of which, of course, should lead to better ad click-through rates, increased sales, and lower costs to market products and services.

At Ad:Tech, all the buzz what less about the kinds of ads you might expect to find on networks like Yahoo’s or AOL’s new Advertising.com platform, which serves the AOL network, and more about how to integrate better into the interactions and conversations you might find on social networks, including Facebook and Twitter. While advertising on networks is still big business, ad-buys on those properties are now a default in any ad plan. Everyone in the business is more interested in those 500 million monthly visitors to Facebook or the millions more who are publishing billions of tweets across Twitter’s network every day.

Given the pace of technological innovation, you’d think the advertising models for all this new technology would be a little more advanced. But you’d be wrong. Seasoned pros and young entrepreneurs alike are struggling to find the right ways to best leverage the range of new advertising channels effectively and efficiently, and which also integrate well into the new experiences all this technology makes possible.

Whether leveraging mobile search to get relevant coupons and offers into the hands of those who’d use them right when they need them, to whether and how to place ads in apps like Condé Nast’s Epicurious such that they’re seen as helpful is still being hotly debated.

What is clear is that the future of Silicon Valley’s hottest companies remain pretty darn bright. Not to mention those earnings.