After months of rumors, hilarious mock-up images, speculations, and guesses, Apple has finally revealed its much anticipated tablet-style computer - it's been coined, the iPad.

Apple's CEO, Steve Jobs made the announcement at a press conference in San Francisco on Wednesday.  The device will feature a 9.7 inch multi-touch LED screen weighing at around 1.5 pounds, specially geared towards interacting with multimedia like movies, music, books, Internet, games, maps and plenty of other digital entertainment.  The built in battery allows for up to 10 hours of use watching video, surfing the Web or listening to music.

The iPad will come in two different models.  Jobs commented, "This is a magical device, at a breakthrough price."  The less expensive model, will have a price tag starting at $499 and go up to $699 and will only include Internet connectivity through Wi-Fi.  If you want to step it up, Apple is also selling a Wi-Fi + 3G version which starts at $629 and goes all the way up to $829 if you want a 64 GB hard drive.  The price points were definitely surprising, as rumors across the Web were estimating somewhere near the $999 range.

Unfortunately, Apple will continue to work with AT&T to provide 3G coverage, the carrier which has been much criticized in the past few months for its less than acceptable service.  AT&T will offer an unlimited data plan which costs $30 per month and will have no long term contract.  So you can cancel it at anytime you like.

Being that the iPad is geared towards consuming media and portability, as opposed to actually being a high powered computer like a MacBook Pro for creating the media, Apple didn't load it with extremely powerful chips and internals.  Instead, Apple built its own custom chip, the 1 GHz Apple A4 chip.  This includes the processor, graphics card, and i/o memory controller all on one chip.  But the demonstrations proved the device is capable of running high quality video, heavy computer animations and all sorts of games, etc.

Apple has also decided to directly compete with Amazon's Kindle by launching iBooks.  It's an application for reading books on the iPad.  The graphics definitely blow away the Kindle's and Jobs even expressed, "Amazon has done a great job of pioneering this, we're going to stand on their shoulders for this."  Along with iBooks, Apple launched the iBooks store with partners including Penguin, Macmillion, Simon & Schuster and others.

Developers should be happy about Apple's iPad, the device will be compatible with Apple's iPhone OS so they can easily make some modifications to get apps looking nice on the new computer.  Apple said the iPad SDK would be made available for download today so everybody could start getting to work.

So, what's missing from the iPad?  Well, unfortunately a lot.  With a large touchscreen, you'd figure Apple would have created a whole bunch of innovative gestures and controls, nothing special was shown.  Also, the iPad has no USB inputs - what if I wanted to maybe hook up an external hard drive with MP3's?  To top it off, Apple showed no signs of a built in camera, so the dreams of video chatting with my brother in LA while sitting in the living room playing with my iPad were quickly diminished.  And lastly, and I think probably most importantly, Jobs mentioned nothing about multitasking, basically, I can only run one application at a time which in the end makes this device seem like nothing more than a scaled up version of an iPod touch.

Now it's just a matter of time until we can get our hands on one of these.  The iPad will be available for purchase in exactly 60 days. 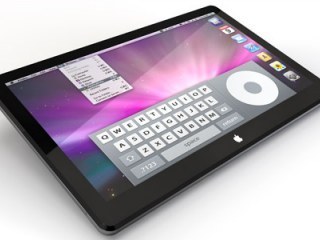