The company deploys a digital-first, AI-based experience that helps members navigate the system 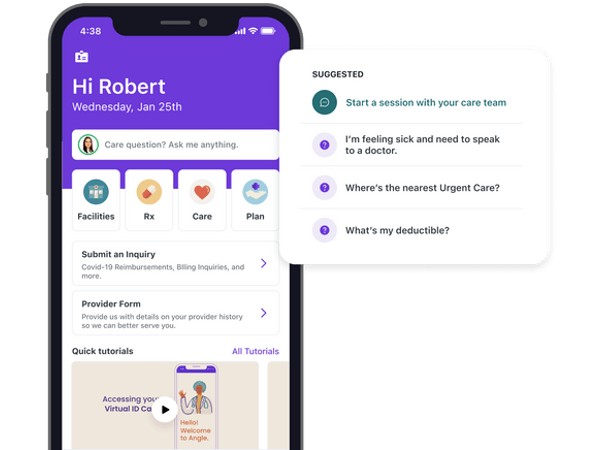 I'm sure most, if not all, of us have had frustrating experiences with our health insurance companies. Part of that comes from just how big they've become: these companies, which have formed over several decades through mergers and acquisitions and consolidation of regional insurance companies, are now extremely fragmented in both their operations and data platforms. That has led to a situation where members need help and can't get it.

Wang and co-founder Anirban Gangopadhyay started Angle after seeing inefficiencies in the system while working as engineers at Palantir.

"At Palantir we had very intimate exposure to how Fortune 25 companies and government agencies operate, both in the healthcare space and outside the healthcare space. We saw how inefficient these organizations were running, that they had siloed data, they had siloed organizations. That made simple things like connecting eligibility to claims data, or connecting claims data to customer support, very, very difficult," said Gangopadhyay.

"I've had a family member pass away due to cancer that started due to hepatitis C, which is a preventable condition that was never caught, and Ty's had similar experiences with his family. That's what inspired us to create Angle, which is really, in our mind, a company that can be a partner for our members."

Angle is solving these problems by bringing automation to the health insurance industry, deploying a digital-first and AI-enabled technology platform that help members access care.

This brings its total funding to over $63 million, following $4 million in seed funding raised in 2020.

Founded in 2019, Angle's digital-first care navigation experience allows it automate processes, such as claims processing, that have typically been done manually; as a result, it is able to keep costs down for its members.

"One of the decisions we made when starting the company was to be a full stack health insurance carrier. So, we do everything in house: from claims processing to policy administration, billing, invoicing, everything's done in house," Gangopadhyay explained.

"We've built our data and tech infrastructure in the way that we wanted, and saw fit, and we leveraged our experience at Palantir to build first in class technical infrastructure to enable a much more modern experience for all of our customers."

As a digital-first platform, members are able to interact with Angle via its mobile app, which is a chat-first interface, though members can also use phone or email if they are more comfortable. They can come to Angle with questions about how much the service costs if they get a bill in the mail they don't understand, or if they don't know which provider to go to, and the chatbot will be able to answer them in a more efficient way, though it also has humans who are available for more complex questiona.

"If they have critical questions they can come to us as that first point of contact and we've built the chat experience, whereby we've automated about 50% of member engagement. And the other 50% is handled by our care team of nurses and customer support staff," said Gangopadhyay.

A new generation of disruptors

Angle recently expanded into Arizona, Georgia, Indiana, Ohio, Missouri, and South Carolina, with an initial focus on the employer-sponsored health plan segment. Since launching in 2021, the company has covered tens of thousands of members.

That focus on the employer market, specifically for small and medium sized businesses, is part of what differentiates the company from other startups that have come along to disrupt health insurance in recent years, including Oscar and Bright Health, said Wang.

"This is health insurance that a company purchases and offers to their employees; that's also the vast majority of health insurance in the US. So, just from that aspect, our market is fairly different from these existing carriers that have gone public recently. That both changes the economics of it, as well as the experience, as well the way that we're distributing and the level of personalization we're able to offer," he explained.

"The way that some of these other companies have operated, and we've seen it in a lot of the materials that have gone public now, is that they essentially have put themselves in a position where they operate as a traditional or legacy insurance company where they haven't been able to necessarily build the technology needed to actually scale operations and some of them are still doing everything 100% manually," he said.

Employers benefit from using Angle in a few ways; first, they can fully customize the health plan product that they purchase. That means that not only can they customize the provider network, the plan benefits, but which services they want to offer. For example, if they want to offer specific telemedicine services or specific pharmacy services or specific digital wellness services, Angle allows the employer to customize that benefits bundle fully, and it then underwrites that product down to one rate in a fully integrated manner.

The company is also fully integrated within the ecosystem of benefits administration, meaning it has integrated with companies like Rippling and ADP, making it simpler for employers to onboard, to run things like open enrollment, and send data, while that's still a very manual process with other carriers.

The second major benefit that Gangopadhyay highlights is the member experience.

"It's not a controversial thing to say that there's a lot of work that can be done to the healthcare experience, and there's a lot of horror stories that probably most people have gone through or know of people that have gone through. This idea that there's a partner and health that will guide you or take the responsibility on behalf of the member is very, very compelling to our employers and to our members," he said.

Finally, the custom benefits bundle employers purchase from Angle is typically cheaper than the same set of services they would purchase across multiple vendors. Instead of having to purchase a navigation platform, a telemedicine platform, a health insurance product, thy can buy one product from Angle that's cheaper than all those different products that they were buying and managing separately.

For members, the biggest benefit, according to Gangopadhyay, is that the company is able to navigate members much more efficiently through the healthcare system because members come to Angle as that first point of care.

For example, it can advise them on services they may not have otherwise known about.

"This is not something that is commonly known among retail members. So that's an example of where our care team has either proactively reached out to members or they've come to us and we've been able to navigate that process for them and that’s saved members thousands of dollars," he said.

To Wang, the relationship that Angle has with its members is fundamentally different than what most people expect from something like a health insurance company.

"Our members don't just see us as a health insurance company, or like a financial layer that they would traditionally have to deal with or like fight with to get them to pay for things and stuff like that but really as a partner in health, where they're coming to us proactively and we're engaging with them proactively on their access to care, ensuring that they're getting affordable care and high quality care," he said.

"In the long term, by shifting that dynamic, really enabling them to get the appropriate care at the right time, prevent disease and reduce the overall cost of health care through that level of engagement."

Now that it has this new funding, Angle's goal is to grow very sustainably, and to focus on building a highly efficient, highly scalable business, one that doesn't require thousands of people to manually handle all of its operations; currently, Angle is managing tens of thousand of members with less than 40 full time employees.

That is also another big differentiator from some of the earlier insurtechs, the first generation ones, particularly ones that have gone public recently, Wang said.

All of this ties back into why Wang and Gangopadhyay started the company in the first place: to solves inefficiencies in healthcare and to do so in a way that is streamlined and efficient.

For Gangopadhyay, insurance is a means to that end; starting an insurance company gave the company more control over the member experience and and to build technology more efficiently, but that's only the beginning for Angle: the ultimate vision is to build a health company that does for that industry what Amazon has done for e-commerce, where the way that people interact with their health healthcare system or with their healthcare providers or with their wellness providers is fundamentally shifted.

"Insurance, in general, is not a popular concept for people. Part of it is because we have these legacy oligopolies that run this industry and they just don't care. They're looking to make money off of huge premiums that they collect, and they have a fixed margin year over year and that's good enough for them. What we're really looking to disrupt is the whole healthcare ecosystem," he said.

"Can we really shift the ecosystem so we're not seen as an insurance company but as a health company? We want to completely change the dynamics where people aren't having to deal with these piecemeal service providers, and they can really get the level of care that they deserve and that should be delivered."