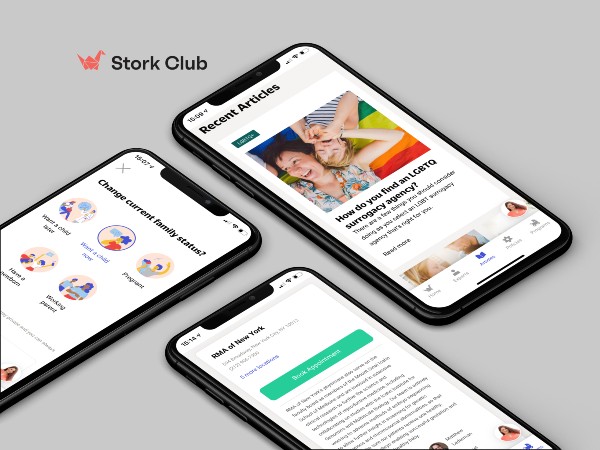 Fertility issues are not an easy topic for many to talk about, yet they are prevalent: roughly 9% of men, and about 11% of women, who are of reproductive age in the United States have experienced some fertility problems.

Jeni Mayorskaya experienced her own issues with fertility, which is what led her to found Stork Club, company dedicated to helping people through the process, giving them more options and more cost transparency.

"I was diagnosed with some reproductive health disorders when I was in my mid 20s and I remember when I heard, 'You have those issues that are actually very common, and we would recommend you just go find a boyfriend and have children now because you're going to have a really hard time conceiving later in life.' As you can imagine, hearing something like this, you can not just follow this type of recommendation that easily," she told me.

"It was really shocking to me that I was supposed to create a family based on the doctor’s recommendation. 'What is this complete nonsense?' Later in life, I learned that I'm not the only one who had to face this type of choice or decision."

She also learned that the solutions to these issues, including in vitro fertilization and egg freezing, are not only expensive, costing tens of thousands of dollars, at least, but they're also complex and difficult to navigate, adding stress to an already incredibly stressful situation. It's a system that seems to do the people who most need it the least amount of good.

"The way fertility works was designed almost a century ago, mostly for a heterosexual couple, where a woman would have a child in their early 20s, and mostly stayed home after that. And this is not how the modern family looks anymore," Mayorskaya said.

"We have single parents, we have the LGBTQ community, we have people who are having kids much later in life, but usually both partners work, and it's really hard just to burden this family and career together."

Stork Club's goal is to make fertility care more comprehensive and accessible for all people, and now it will be able to put that plan into practice: the company announced a $30 million Series A funding round on Wednesday, led by Existing investors Bowery Capital, Slow Ventures. In addition angels Jack Altman, founder of Lattice; Zach Sims, founder of Codecademy; Oleg Rogynskyy, founder of People.ai; and Kevin Mahaffey, founder of Lookout also joined the round.

Founded in 2017, Stork Club works with employers to add its services to their employees' existing health plans. One they are on the platform, employees and their dependents can use StorkClub to view medical providers in their network, while also seeing what their out-of-pocket costs will be. Stork Club also provides members with a Care Navigator who can help guide them and answer fertility, maternity care and insurance-related questions.

One of Stork Club's major differentiators is that, while other companies provider users with one option for where they can start, Stork Club users can start at multiple points along the fertility/childcare journey.

"There are five categories on the first page once you activate an account: to have a child later, want to have a child now, pregnant, have a newborn, or you're a working parent. You can choose any of those stages and we cover the full family building journey. And once you're in, you have a tailored path, how we can help you achieve your goal,"

Stork Club partners with medical providers across the US, and has now expanded to over 250 locations; it also also developed its own vetting process to identify high-performance doctors, clinics and labs, while also establishing its own single-price care bundles. By identifying the best doctors, and then vetting them, rather than having every single provider in its network, Stork Club is able to provide users with better, and also cheaper, care.

"We'll look at such criteria as, how many cycles of IVF does it usually take to get to a healthy birth? Also, what is the number of twins, triplets, versus single babies? IVF is known for a high number of unexpected twins and triplets," Mayorskaya said.

"This really affects a mother's health, and very often those pregnancies with multiples are going to be premature, which is additional risk for mother's health but also additional cost for employers, because premature birth means very often spending time in newborn ICU care and just one day of this care sometimes costs $25,000."

As a result of its physician vetting process, Stork Club members have 75% fewer unexpected twins and triplets, significantly reducing overall maternity costs: a company with just a few thousand employees covered can save anywhere from $500,000 to $3 million per year.

The company currently has over a dozen customers, including Ropes & Gray, Crescent Capital, Corgan, Fors Marsh Group, and Inception.

Over the last year, the company, which launched its product for self-insured companies, saw 5x growth in revenue. Part of the reason for that, said Mayorskaya, is that, from the employer perspective, they are understanding that these types of services are really important to retain top talent. For the employees who will use these services, she believes that the pandemic put things into perspective for many people.

"For many people, it's a very short window when they actually can have a child biologically; we have different limitations. What people really realized is that there is that nothing more important than a family. Regardless of your career goals, this is your first priority, and they would like to just do this," she said.

"You never know if another huge disaster will come, and you really want to make your dreams happen as soon as possible. Because of that we saw really huge growth in utilization of services, both fertility preservation, actual assisted pregnancies, surrogacy, adoption, natural pregnancies. People see this value more clearly than bad things happen."

Now that it has this new funding, the company plans to build out its team, particularly in sales and customer success, while building out its go-to-market machine. It will also add new features to the product in order to help employers to have better clinical outcomes for their people, as well as further reduce their cost.

In conjunction with the funding, Hemant Taneja, managing partner at General Catalyst, has joined the board at Stork Club.

"Hemant been in healthcare, he actually runs a company as well, he co-founded it's called Commure, it's a platform for healthcare providers, and he's been a big advocate for the healthcare industry moving forward for a very long time," said Mayorskaya.

"He had been together with Livongo from the early stages and their concept of making sure that it's not only paying for services, but that you're paying people to stay healthy longer. It's such a beautiful concept and we all want to make it a reality. We have the best partner to achieve this goal together, starting with maternity care."

Ultimately, Stork Club want to to support people from all walks of life, no matter what stage they are at, and allow them to fulfill their dream of having the family, regardless of their circumstances.

"Our goal is to help employees and individuals to close the gender inequality gap, and just make sure that women do not have to have a choice: should they get pregnant, or should they be ambitious in their career? Same for men because they have the same choice or for LGBTQ community. Everyone has equal rights to have a family."