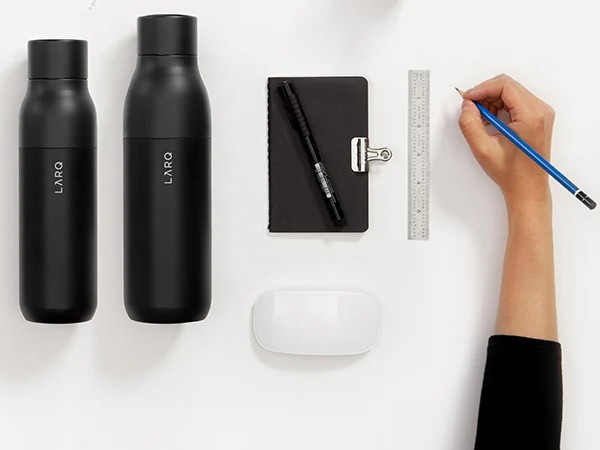 We've all seen the videos of plastic being taken out of the ocean, and seen the stories about people ingesting the stuff because it's in our food, our water and our air. However, even the more environmentally friendly options, like reusable water bottles, have their own problems and drawbacks, including bacteria and viruses that can fester and make people sick.

That is what led Justin Wang to co-found LARQ, a company that has developed a self-cleaning, reusable water bottle that can eliminate nearly 100 percent of germs using UV lights.

"Despite the wide availability of sustainable options, I noticed my family had a plethora of hydration products, both reusable bottles and pitchers. I wanted to find a solution to curb our use of plastic. I realized this was not an issue of access but an issue of these products falling short of need by failing to resolve the core pain points of the average consumer," Wang told me.

"For example, I had dozens of reusable water bottles, but I always found myself buying another bottle because they were hard to clean, or some other inconvenience."

The technology has piqued the interest of investors, as the company announced a $10 million in Series A funding round led by Seventure, as well as participation from DCM, Draymond Green, Capricorn Investment Group, Heuristic Capital, IdeaFarm Ventures, and Augment Ventures. This brings the company’s funding to date up to $15.7 million, following a seed round that was a combination of crowdfunding and Silicon Valley Bank venture debt.

In addition to the funding announcement, it was also revealed that Amanda Chaperot from Seventure, David Cheng from DCM, and Mike Liao from Heuristic Capital will be joining LARQ's board of directors.

"We are delighted to have Amanda, David, and Mike join our board of directors, and can't wait to see the positive impact we are able to create in the hydration industry with their knowledge and expertise. Their experience will help to advance our mission of bringing healthier and more sustainable hydration solutions to consumers across the world," said Wang.

LARQ currently sells three products: the first is the LARQ Bottle, which is its flagship product. The double-wall insulated bottle, which allows users to keep their water cold for 24 hours, and hot for 12, sells for $95.

"It was designed for everyday use, but is stylish enough to be taken to work or play," Wang explained.

The company also sells the LARQ Bottle Movement, which is ultra-lightweight, non-insulated, and comes in "a stylish silicon sleeve to protect it from bumps and nicks while you are out hiking, biking, or at the gym." This sells for $78. Earlier this month, the company introduced its third product, the LARQ Pitcher, which is currently available for pre-order.

All of LARQ's products use the company's proprietary PureVisTM UV-C LED technology, which combats the most common complaints about reusable water bottles, such as odor and contamination, difficulty cleaning, and shortage of on-the-go access to pure drinking water. Users just push a button and the bottle cap emits UV-C light, eradicating up to 99.9999 percent of bacteria and viruses.

"We have a really fun feature on our website where customers can measure their impact by switching to a reusable water bottle, calculate their savings, and see how much making the switch would reduce their plastic waste contribution and carbon foot print overall," Wang told me.

The company sold more than 75,000 units in 2019, surpassed $1 million in monthly revenue bookings in Q4 2019, and anticipates that it will double its business this year. LARQ products are being sold in 88 retailers, in stores such as Nordstrom, Net-a-Porter and Bloomingdale's, in 16 countries.

Now that it has this new funding, LARQ plans to continue its global expansion through the next year.

"We are already available in the US, Canada, UK and France, but with this additional funding we plan to expand to the areas who have expressed the most demand for our products, including all of the EU in 2020 and further plans to expand to APAC later this year and into 2021," said Wang.

"Our goal is to make it easier for people to make the healthier and more sustainable choice, anytime and anywhere."