Enable My Child raises $1.2M to provide teletherapy for children

There has been a major shift in the conversation around mental health in recent years, with an increased focus and understanding of the problem, not to mention venture funding, but that seemingly has not yet trickled down to talking about the same issues in children, even though, according to the Centers for Disease Control and Prevention, these conditions are prevalent among people in that age group; around 10 percent of those between the ages of three and 17 years suffer from depression and over 7 percent have either a behavior problem or anxiety.

What these children really need is early diagnosis along with effective treatment but the majority of them are not receiving it. That is what Enable My Child (EMC) is looking to provide; EMC is a therapy solution for children, providing therapists with automation tools and clients with a teletherapy solution.

On Thursday the company announced that it raised $1.2 million in a seed round of financing led by CMI Ventures.

A big part of the problem when it comes to children getting therapy is access, and that is not only an issue in the places one might expect, Syed Mohammed, founder and CEO of Enable My Child, told me in an interview.

"People in rural areas, they just don't have enough therapists, but in urban areas, in big cities like New York, therapists' time is being squandered and they are actually only treating for half the hours they can. There’s a lot of inefficiencies that have led to the access problem," he said.

The second problem that he found was the quality of the therapy, namely that many children wound up seeing adult therapists.

"That’s a big problem because children are not just smaller versions of adults. You need specific communication skills. The second problem with quality, is wrong diagnosis, which happens all the time. Then you end up providing wrong therapy. And when wrong therapy is provided children don't progress at all."

Finally, there are the issues that the therapists themselves have, which includes their time being wasted on menial tasks that don't allow them to fully commit themselves to their work and their patients.

"We keep talking about a shortage of therapists, but what’s really happening there is we have 500,000 therapists and, by law, they can see 50 children each. So, if you multiply by 500,000 by 50 children each, that’s 25 million children. However, we only have 17 million children in the country who need help, so there isn’t really a therapist shortage; we’re squandering their time with paperwork and we’re not monetizing them well," said Mohammed.

To solve these issues, Enable My Child developed a technology called the EMC Brain, which not only acts as a teletherapy solution, but also incorporates artificial intelligence and machine learning to analyze data, and to help automate tasks for therapists such as billing, scheduling and document filing.

Mohammed describes the EMC Brain as being "very much like the human brain," with two sides that perform different tasks; the left side of the Brain is the side that's more analytical and practical, so it does things like help therapists complete paperwork, automatic scheduling, automatic billing, automatic payment and compliance checks.

"Once a session is done, case notes need to be done and these things take up a lot of time, so our Brain populates some of these things, it manages documents. It does compliance, so California requires a child to have a prescription after three therapy sessions, our platform raises its hand and lets the parents know, lets us know, that the child is now going to need therapy. So, we solve compliance problems, management problems, completion of documentation, thereby giving more time to therapists," said Mohammed.

The right side of the Brain is the more intuitive and creative side, and this aspect of the technology Mohammed believes is what will "have a big impact on the economy and on the world," as it can actually learn what therapies have worked best for children in the same age range, with the same disorder.

What this really means is that it takes some of the trial and error out of therapy, and allows children, whose brains are growing at a vert fast rate at this stage of life, to get help quicker and to give them a better chance of improving.

"Once that happens, you’re giving children a fighting chance of achieving just as much as that other child, and you are now reducing costs, so if you have an AI that’s giving better treatment strategies, in theory whoever is paying, you’ll do lesser therapy because of the quality of therapy," Mohammed said.

"We fix therapy as a whole. How we’re tracking progress, the kind of therapists that we’re hiring, the experience of the therapist, the artificial intelligence and all that, we are a therapy company that uses technology to enhance therapy, monetize therapists well and dramatically help how therapy is being done. It needed to be improved, so we’re reimagining it all the way from the top."

As effective as face-to-face therapy

EMC's primary customer, which represents over 80 percent of its revenue, are public and charter schools in America. Every public education system in the U.S. needs to have a special education department by law, so the company contracts directly with them, and any children that fall under the special education department will end up being referring to Enable My Child. At the end of the month the school is billed based on an hourly basis.

The company's other customer right now is the Department of Health, which came about when the company got a call from the state of Idaho, asking if the platform could be used to help children who were waiting for therapy within its system.

"The Department of Health funds an organization in every county, every city, in the United States, and they’re called Early Intervention. These organizations are in place to provide therapy and to provide coaching for parents who have children between the ages of 0 to 5, because, remember, the brain is developing the most during those ages," Mohammed explained.

"When there’s an early diagnosis, we work through the Department of Health to provide coaching to parents to help their children. Therapy over here is a little different, we’re more coaching parents, but we have state department contracts with Hawaii, American Samoa, Idaho and the entire state of Ohio, every county in Ohio where there’s an early intervention center refer children to us so we can provide their parents with coaching and whatnot. It’s a small part of our business but it is picking up very, very quickly."

While the company doesn't yet have stats around the effectiveness of its therapy techniques as "graduation from therapy takes more than a year in most cases, so we’re still learning more about that," Mohammed did note that that teletherapy is actually just as, if not more, effective than face-to-face therapy for children.

"There’s a lot of medical research that has been done on the effectiveness of it and, in some places, it's even proven that teletherapy is almost better. For example, if there’s a child who is four or five years old, and you take them to a hospital or a clinic and you do therapy, one of the most important things about therapy is understanding the problem. When you put a child in an alien environment in front of new people they tend to talk less. But when you put them in front of a camera in their living room or classroom, now they talk more because they’re in their comfort zone and when you’re talking more you’re telling more to the therapy, and when you tell more to the therapist she’s able to provide more effective therapy. So, that’s a great example of how teletherapy is beneficial," he said.

What the company has been able to determine are improvements for the 100 therapists on its platform, most of whom work for EMC as contractors, specifically in terms of increased pay. Currently, the average salary that a therapist makes is about $60,000 to $70,000 a year, but EMC is able to pay them around $50 an hour, which becomes $55 an hour with a performance bonus, meaning full time hours can net them $100,000.

Enable My Child plans to use the new funding, in part, for hiring new people, as well as to invest in its technology, specifically its artificial intelligence platform.

"The plan going forward is continuing to invest into ourselves, to enhance the quality of the service and continue to invest into this AI that we have to help it be more accurate, smarter information," Mohammed told me.

"We're also going to bring in talent. As a startup, I’m sure you’re away we’re bootstrapping things most of the time, and we try to find whatever is best with what we have, what is possible for us to acquire, but now that we have funding we want to bring in talented staff that will help us think about better ways to track progress and improve therapy. We are continuously hearing from parents, and one thing that I think businesses tend to forget is to hear our customers and implement the changes that they want. So, we are always listening to our customers, our therapists, our clients, and implementing those changes."

One thing that Mohammed stresses is that Enable My Child is about more then simply making money, but to have a big impact on the lives of the children who it provides therapy for.

Right now, there are over 17 million children in the United States of America that require some sort of therapy, and 60 percent, or 10 million of them, currently get no help. EMC wants to finally give the rest of those children the help they need, to allow them to lead full lives in the future.

"A part of these children are going to need support and they’re not going to be able to hold proper jobs like you and I, they’re not going to be able to keep up with their relationships, and some of these children will get into the juvenile system some of them will end up taking their lives. So, our technology doesn’t just take care of the problems today, but, in theory, it has the potential of saving government and our economy a whole bunch of money because you’ll now be reducing the number of children that require help and support once they become an adult. They’ll be able to function, have jobs, and they won’t get into the juvenile system, they won’t end up taking their lives," Mohammed told me.

"I was a child that went through it. Those 17.1 million children in the United States of America, my goal is to reach them, my goal is to access them, my goal is to tell them, ‘If you ever need it, we’re here for you.’ That’s my ultimate goal. My investors are on board with it. The way we do business, we’re not always looking at dollars, we’re looking at how we can provide access and where else we can make up in order to make work. So, my mission is very, very simple: it’s reaching the children, all of them that need help." 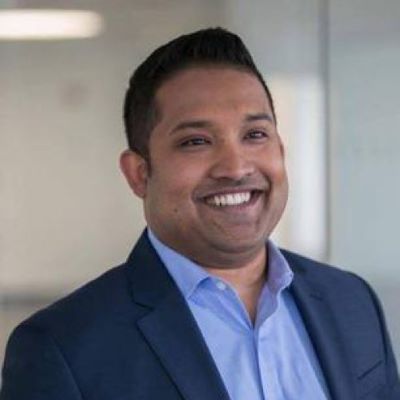