Should ‘smart’ phones be smarter about us? 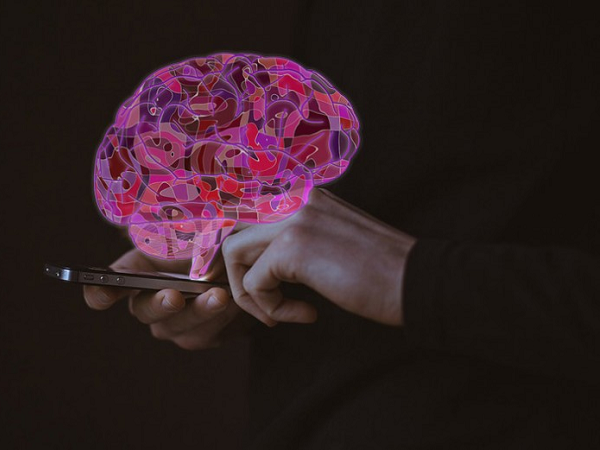 We love our smartphones. They’ve replaced every device for our attention. We even dress them up to reflect who we are. We rely on them for everything. Long ago were the days when we woke up to the sound of a radio alarm and turned on our TV for some morning news or weather. Today, our phone is likely to wake us up, deliver our mail, inform us of the news and weather, and overwhelm us with the latest birthday, milestones, gatherings, vacations and other updates from our several hundred not-so-close connections in social media. The same routine happens at night until the moment we turn off the lights.

In fact, mobile is expected to finally pass television in terms of the time spent per day sometime this year.

The big difference between the phone and the TV, of course, is that the phone can give you all your information at once, right when you want it. It’s a wonder it doesn’t act more like a concierge, anticipating our needs. After all, they’re supposed to be smart and the definition of smart should go beyond giving us information when we ask for it. Maybe today’s phones should foresee and predict like an assistant. For example, my Apple phone informs me of traffic patterns every Sunday because it knows my weekend routine. That’s pretty clever. That information is relevant.

The data already show that, when given the right content at the right time, people are engaged. The only question is: who will be the one to actually give it to them?

Open your phone. What’s the first thing you see? Typically, it’s the last app you viewed: your text message threads; your camera.

Is it what you want at that moment? Typically no.

According to a new report out from Verto, called The Mobile Unlock Journey, half the time we unlock our phone we merely find the homescreen – a collection of apps.  Of the remaining half of unlocks that relaunch the last app used, that app is closed within just 10 seconds more than 50 percent of the time. And that is, to put it simply, because the information they are seeing isn’t relevant to them at that moment.

The exception to this is social media. It’s hard to understate just how dominant social media is on mobile right now; looking at the top 20 most used iPhone apps of 2018, half of the top 10 were social media. Facebook, more than any other company, has figured out how to exert control over your mobile device without ever being overtly in control as four of its apps, the flagship app, Messenger, WhatsApp and Instagram, all make the top 20, while Snap has two of its apps on there, with Snapchat and Bitmoji, alongside Twitter.

When it comes to the serendipity of engagement at unlock, social also accounts for three of the top five best performing apps.

According to the Verto report, social leads all categories in terms of unlock launches, while other categories that you might think would be popular as well, such as the phone’s browser, photo, video, music and mail apps, all have just a fraction of the launches that social has. 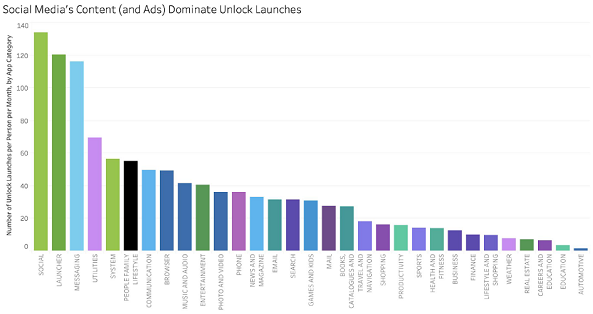 So why is social doing so well where others have failed? Perhaps it’s because these apps make it super easy to get new relevant content. These apps are  constantly being refreshed with new, relevant content that you might peruse BOTH as the last thing you do before setting your phone down, AND as the first thing you do if you unlock your phone and serendipitously discover more new, relevant content. That’s why, in the case of Facebook, nearly 16 percent of its usage comes when the app is relaunched at unlock.

All of this suggests a huge opportunity to reinvent the typical way that phones proactively help consumers discover new content.  Today’s phones do this through push notifications – breaking news, for example. Yet less than 2 percent of a consumer’s unlocks start by engaging with such content notifications. People just don’t unlock their phones because of those alerts, however hyperbolic they are. The data show, they don’t kick off a person’s mobile journey.

The data suggest that if there was an app that could give users the right content at the right time it would have extremely high engagement. And that app does exist and it’s doing exactly what was intended.

What I’m referring to is MetroZONE, an app that is available to Metro by T-Mobile subscribers. The service says it “intelligently presents personalized content at unlock”.  What that means, essentially, is that it when people unlock their phones, the first app they might see is MetroZONE, and it displays content relevant to them.  But, if their system determines the user is engaged or occupied, the platform continues to curate content in the background.

MetroZONE is, of course, way out ahead of all others when it comes to apps that are launched more frequently from unlock; given that the entire point of the app is to be the first app users see when they unlock their phones, that shouldn’t be surprising.

Again, engagement is the true metric to look for here: MetroZONE actually beats out every other app. Looking again at Verto’s Unlock Engagement metric, MetroZONE generates 86 Unlock Engagements a month. That’s nearly double the number of times a person discovers and engages with Facebook at unlock.

That means that, more than any other app, MetroZONE is giving people what they want to see, when they want to see it. Not only is MetroZONE doing what it’s supposed to in terms of getting eyeballs on the app, it’s keeping users there by clearly giving them something they want, otherwise they’d turn it off.

The success of an app like MetroZONE to get eyeballs on the right content at the right time proves that there is a market for services like these, and others are starting to follow suit.

For example, content discovery and native advertising platform Taboola announced in March that it acquired the Start Division of mobile discovery company Celltick, including the Start and Start Magazine product lines in order to, in their words, “bring personalized and relevant recommendations in the form of premium publisher content on mobile devices.”

On top of that, Taboola said it also has started to integrate with phone manufacturers, like ZTE and vivo, so they can also give their users personalized information.

However, this type of service is still the exception rather than the rule, so the real question becomes: why don't more carriers, OS providers, hardware makers push in this same direction as MetroZONE? It may be that their roots are in not getting too personal with their subscribers. After all, carriers know what’s being said on the phone calls, but God forbid they ever use that to target their subscribers. There’s also that “creepy” factor  in that people are afraid that someone in corporate America is dictating what they’re seeing on their phones.

At the same time, consumers are increasingly OK with being transparent for something in return. They often privilege convenience over privacy.

They’re in powerful positions to not only deliver content, but to serve it at the right time.

Will they be the ones to make the phones smarter?