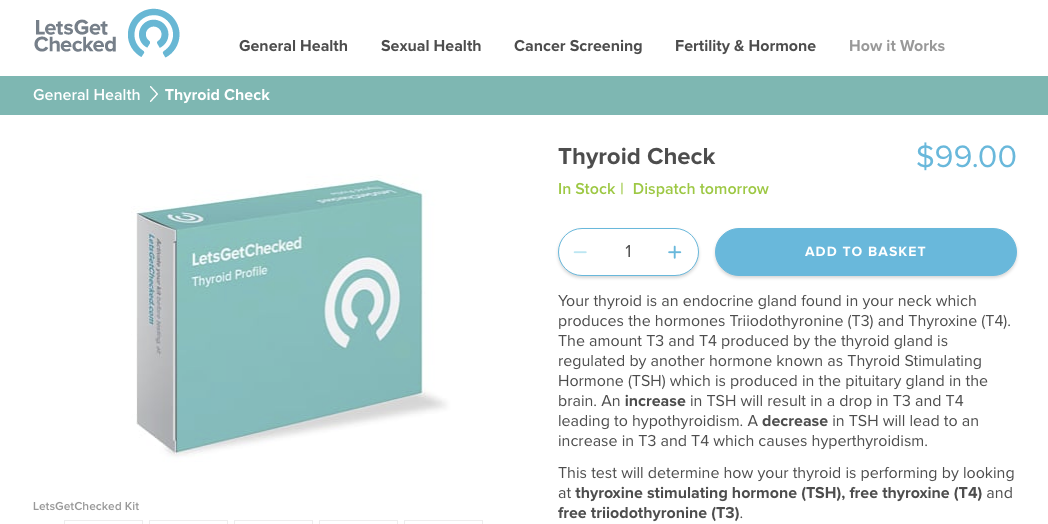 For most of us, checking to see if we're deficient in Vitamin D or whether our thyroid and kidney are functioning normally would take a visit to a lab, and typically a doctor visit first. The process is time consuming and costly.

Enter home-testing kits, which are emerging but aren't exactly common yet. One company, LetsGetChecked, hopes to become a leading provider and it just landed $12 million in a Series A round to get it there. China-based Qiming and Optum Ventures, the venture fund of Optum, led the round.

The new round will help LetsGetChecked integrate with more insurance carriers so consumers don't have to pay for this service out-of-pocket (well, at least until they meet their deductible).

Peter Foley started the company in Dublin, Ireland in 2015, after completing his master's thesis on Diagnostics related groups or ICD10 coding, which relates to reimbursements in healthcare. "In completing his thesis, I had access to epidemiology information which provided a clear picture that the prevalence of chronic diseases, cancers and infectious diseases were on the rise globally," Peter said. There were a number of reasons, such as a doctor shortage, but the one problem was lack of enough preventative screenings.

To that end, he decided to focus on a company that could improve access to screening. He contracted with a UK-based lab and went to work. By 2016, his team raised $1.5 million in seed. From there they built out a platform that integrated with labs across 14 European countries, Canada and in the US. They built out their physician network, set up distribution centers for their kits as well as a retail market where consumers could pick up their tests off the shelf in a pharmacy.

Today, they have more than 10,000 patients, growing 25 percent month over month.

"Our value proposition is that we have a logistical platform and created an ecosystem that connects the dots in a virtual setting," said Peter.

So how does it work? If you need your thyroid checked, or hormones, or a check to see if you're developing cervical cancer, you can go to the website or a pharmacy that carries the kit and buy the kit for $40 to $200. You would then take a finger-prick test (95 percent of tests are blood samples, saliva and urine are the other samples) and then mail back to LetsGetChecked. Within 24 hours of receiving your sample, LetsGetChecked delivers to a lab. The lab receives the package, which is anonymized and only identified with a barcode. The lab then runs their analysis, creates a report and then sends back to LetsGetChecked, which then has their own team of doctors to review and approve. If a test is positive, the consumer is called. This process takes about five days, said Peter. A consumer can then keep track of their tests on their LetsGetChecked dashboard.

Getting your thyroid checked on LetsGetChecked is roughly $99 compared to other home-testing platforms, such as Everlywell, which has a thyroid test for $159. (See how they're different below).

Peter met Mark Mcdade, Partner at Qiming, in 2017. After a year of getting to know one another, Mcdade made the investment. Mcdade opened up Qiming's US office specifically focused on healthcare and has $100 million in capital under management.

Mcdade also believed that LetsGetChecked's blood-sampling process is superior to competitors. While there's a number of competitors offering online testing for fertility and other health markers, "they're using dried blood vs whole fluids." While Everylywell may also be able to offer this type of processing of blood samples, Mcdade pointed out that another competitive advantage that LetsGetChecked has is its broad network above existing labs.

Mcdade expects the new capital to last for about two years, in which time he hopes the company will expand its distribution channels to drugstores and insurers, which would also help offset payments consumers are currently paying. Profits will come after the next round. "The focus should be on building out channels and overall revenue growth and we'd like to see revenue at least doubling the first couple of years."