With a myriad of tests, acquisitions around delivery - shopping is looking very different

Fast forward nearly a decade later and next-day or same-day delivery seems commonplace, driven in part by our on-demand culture. In fact, we may soon see direct-to-fridge or our closet if we allow smart locks and cameras monitor delivery folks coming into our homes.

But if you haven't been keeping tabs on how these services have unfolded, here's a look at what the major retailers: Target, Walmart and Amazon have been doing to step up their efforts against one another in the war to become the same-day delivery retailer.

Just yesterday, Walmart announced it's acquisition of Parcel, a package delivery company, which specializes in fresh, frozen and perishable food during the last mile - meaning to a customer's doorstep.

"Delivery is increasingly one of the most important elements for today’s online shoppers, as demands for speed, flexibility, and reliability continue to grow. That’s why my team spends a lot of time thinking about ways we can make deliveries faster and more convenient for customers," said Nate Faust, senior vice president, Walmart U.S. eCommerce Supply Chain, in a Walmart blog post. "We plan to leverage Parcel for last-mile delivery to customers in New York City – including same-day delivery – for both general merchandise as well as fresh and frozen groceries from Walmart and Jet."

This acquisition follows Walmart's announcement in August to officially launch its grocery-delivery service in Tampa, Fl.

Even more recently, Walmart is testing "direct-to-fridge" delivery, with its announcement in late September of its partnership with August Home to deliver groceries to your house when you're not even there. August Home makes smart locks, so a customer needs to install these smart locks to enable the grocery delivery person to come into the home.

Also last month, President of eCommerce, Marc Lore mentioned in a statement that Walmart is testing same-day delivery in three stores-two in New Jersey and one in Arkansas. Walmart associates can sign up to deliver orders after their shifts to nearby homes in order to earn extra income.

Lore states, “Not only can this cut shipping costs and get packages to their final destinations faster and more efficiently, it creates a special win-win-win for customers, associates and the business.” 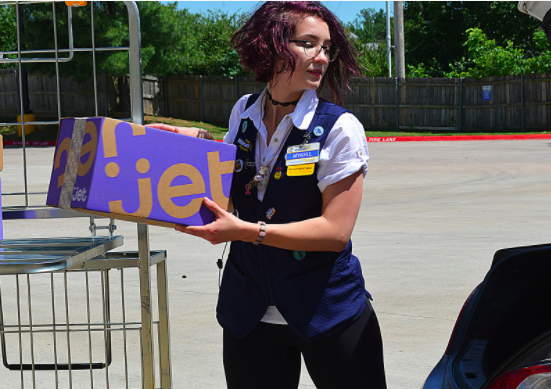 Lore is the Founder of Jet.com, which uses “realtime pricing algorithm” to cut costs by pricing items based on their locations in distribution centers. For example, items bought together from the same store would be cheaper. Jet became a subsidiary of Walmart in 2016.

This past June, Target launched its Target Restock, a next-day delivery program. The way it works is customers go to Target's website and can select more than 15,000 of products to purchase and available for next-day delivery. The price is set at $4.99 per box with each one capable of holding up to 45 lbs. Target Restocks supplies standard household items and non-perishable foods. In time, fresh and frozen foods may be included. Orders placed by 2pm Monday-Friday will arrive for delivery the following day. 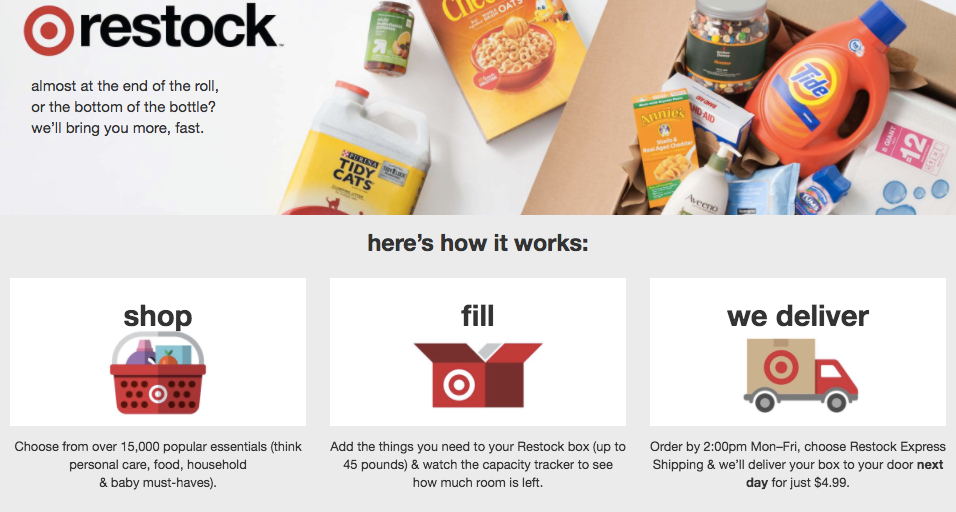 In August, Target also made an acquisition to expand its delivery capabilities. It acquired Grand Junction, a San Francisco-based transportation technology company, that Target acquired this past August. The latter’s tracking technology and algorithms optimize distribution within Restock’s city limits.

“Target is seizing a tremendous opportunity to leverage local delivery as a retail differentiator… we’re thrilled about helping to pursue this opportunity and join Target at this unprecedented time in retail," said then Grand Junction founder and CEO Rob Howard, in a release. Howard has since taken the position of Target’s Vice President of Technology as a result of this partnership.

Target Restock is still in its beta phase, but it has already served over 70 million customers. While next day delivery was limited to store membership REDcard, now everyone can join in on the fun. Target Restock is available in Atlanta, Baltimore, Chicago, Los Angeles, New York, Philadelphia, St. Louis, Washington, D.C. San Francisco will join that list in mid-October.

Bringing in stiff competition to the two brick-and-mortar retailers is Amazon. Last week, Amazon announced a partnership with Olo, a mobile ordering and menu platform for restaurants, with over 40,000 U.S. locations.

Amazon will conduct the deliveries while Olo is responsible for taking the orders and providing technology platforms for the menus. The partnership with Amazon has also pushed Olo to develop Rails, an application that streamlines the orders its restaurants receive from Amazon. By teaming up with Olo, Amazon gains access to a customer base that was previously unavailable to it. 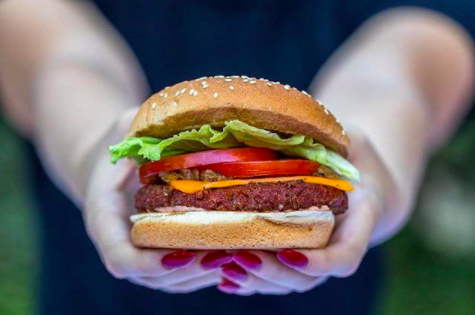 Sizing up the market

The U.S. food market is worth $1.5 trillion, with a rough split between groceries and restaurants. Note, that Amazon spent $13.7 billion to acquisition Whole Foods early September, implementing a store-wide price reduction to boot. Amazon’s grocery delivery service, Prime Pantry has also been doing well since its debut. The price is $5.99 for orders of 45 lbs or less, with an expected 2-day delivery time. With solid footing in online sales, grocery storefront and now food delivery, Amazon has built a name for itself as the “can-do all, will-do all” retailer.

This grocery war is not without its backlash. Since big retailers have capitalized on the niche of speedy deliveries, smaller entities like Instacart and Grubhub are starting to get hurt.

GrubHub is a straightforward restaurant delivery service. Amazon’s partnership with Olo resulted in a 7.3% fall in GRUB stock last week. Now Grubhub is refusing to call itself as a food delivery service to in response to its driver’s request for higher wages.

Instacart is grocery delivery service. With a variety of stores available in city, shopping at multiple chains can be done in one sitting. Orders can arrive within two hours, but the customer can choose the delivery time within 6 days. The fee depends on the order size and delivery time; an order has to be at least $10. Instacart charges an additional mark-up on products to cover service costs. Once Target and Walmart improve their services, Instacart will surely see a decrease in traffic.

Time will tell what is in store in the upcoming months. Through their ventures and testing, these big retailers are collecting tons marketing data. Still, new technologies and trends are introduced all the time; being able to collaborate with specialist in different fields means that no idea is too extreme. Let the clash of market kings commence.

Aspiring writer on the weekdays, wanna-be outdoorsman on the weekends. I am passionate about how innovations in AI and technology affect out environment.