Stockholm, Sweden - June 19, 2017 - The Grand Masquerade, a Sweden based Melodic Rock group is releasing their first official music video for “By My Side” which is the opening track on their debut EP “MMXVI.”  The video will be available on their social media sites as well as the official website at www.tgmband.com, as of June 17, 2017.

“By My Side” was originally written by future bandmates John Sebastian and Freddy Claye back in 2006 although initially it had a different sound and feel to it.  The song was revisited again in 2010, when it was completely rearranged and began to form the finalized version that was eventually released on “MMXVI” on August 26, 2016.  “By My Side” laid the foundation of the sound that The Grand Masquerade would utilize in their music. 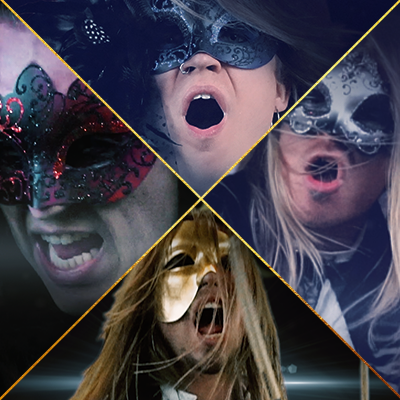 The video is produced by Owe Lingvall of DreamDay Media, who has previously worked on music videos for bands such as Eclipse, Hemmerfall and Kamelot.  According to Freddy, the band chose Owe “because his previous videos have a darker vibe to them, both his reputation and completed works are excellent and he creates everything in 3D, so we are able to get the environment we want.”

The Grand Masquerade has taken their music inspiration from the 80's glam-era rock and integrated the romantic image and mystique of the Venetian Masquerade.  The music is a fusion of melodic and high energy hard rock, combined with the positive and bouncy vibes of ​pop-rock, resulting in a fresh sound that leaves their unforgettable hooks stuck in your head, while other notes linger with an almost hauntingly ethereal undertone.

Fans in Sweden may recall a series of commercials that ran in 2016 for ATG Sverige, featuring the flamboyant rock band Vinnie and The Dreamers.  While the music and image of each band are completely independent of one another, you will recognize that these are the same talented musicians, transformed and now performing in their most memorable and proficient manifestation.

For more information, booking or media inquiries for The Grand Masquerade, you can check out the website listed above, or contact the band directly at info@tgmband.com.