Augmedix raises $23M to cut down on doctor paperwork

The company plans to go beyond just note taking, to helping physicians during exams in real time 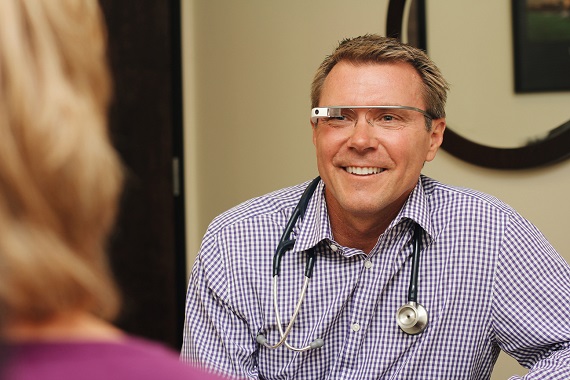 I could never be a doctor. I'm of the opinion that whatever you've got inside you should stay inside you, and there's no reason for me to ever see it. Also, there's the paperwork. But mostly the blood and guts thing.

In all seriousness, paperwork has actually become a huge burden on doctors, causing them to spend three to four hours a day filling it out, or two minutes on the computer for every minute they spend with a patient. Remember, four hours is half a standard work day, and that's on top of all the patients they have to see. That's a lot of time.

Augmedix is a service, powered by Google Glass, that allows doctors to focus on patient care by assisting them with their documentation.

On Thursday, the company announced that it has raised  a $23 million strategic round of funding from new investors McKesson Ventures and OrbiMed. This funding comes just seven months after its last round of funding, a $17 million round in April.

This is als the second time that five national health systems, including Sutter Health, Dignity Health and CHI, all of whom are also Augmedix customers, have invested and committed to putting the service to work in hospitals and health centers around the U.S.

This latest round brings the company's total raised to $60 million.

Founded in 2012, Augmedix features a remote assistant that, through Google Glass's audio and video capabilities, is able to create a record of the conversation that the patient has with their doctor. That includes everything from the initial conversation, the exam to the diagnosis and physician instructions.

When the doctor is finished with a patent, the documentation will be done for them; all they have to do is review it, and sign off on it. As a result, Augmedix is able to reduce EHR charting time by 80 percent, allowing doctors to see around 25 percent more patients since they don't have to spend it filling out paperwork.

In addition to the remote assistant scribe, the physician also gets enterprise grade security, analytics business process services, and IT services.

Patients, of course, might not be comfortable with their doctor using the device, and so they are able to decide for themselves whether or not their doctor can use Augmedix, Pelu Tran, the company's co-founder, told me in an interview.

"The acceptance rate is 99 percent, with only 1 percent declining use of a Google Glass unit. As you know, there will always be some people turn down anything. There's never complete acceptance," Tran said.

"While you'd assume it would be because of more sensitive exams, actually the more common reason are psychological concerns and personal confidential issues, especially around psychiatrists and psychologists. We're already trusting care team for physical health, so the addition of Google Glass usually isn't a problem."

On the physician side, there has also not been much of an issue with the adoption of the technology, since all the doctors have to do it wear it like a pair of glasses, and it doesn't require much interaction beyond from them that.

Currently, there are nearly 500 physicians using Augmedix, through its healthcare system customers, and nearly half a million patients who are seeing a doctor that uses the platform.

The new funding will go toward meeting the demand of existing customers, while bringing in more health systems to help scale the product. It will also go toward building out the platform with more tools and services, which means moving beyond just being a note taking assistant, to one that can actually help the doctor during the exam.

"We're a physician's remote assistant. That's one way of generating value, taking the data from the physician to create note. We have the opportunity to help the physician provide better care, by having the assistant do the blocking and tackling. That means making sure patient receives the best care," he said.

"Only 12 percent of diabetics, for example, have the condition under control, while the other 88 percent have issues. There's so much work to be done, and there aren’t resources. We want to add more value, so we're talking about contributing provider assistance during point of care. Augmedix can look up lab results, detect medical errors, remind them of overdue care gaps, or connect to a caretaker. Our value is taking off burdens, and bringing in resources. This is how we can add the most value."

Augmedix has already had some successful trials of that service, but will use the new funding to help develop and expand it.

"We want to see systems have Augmedix deployed across their entire physician base, and for our systems to have the ability to ensure care quality that improve patients outcomes. That is what will fundamentally differentiate our platform."