Glint adds another $10M to its Series C funding 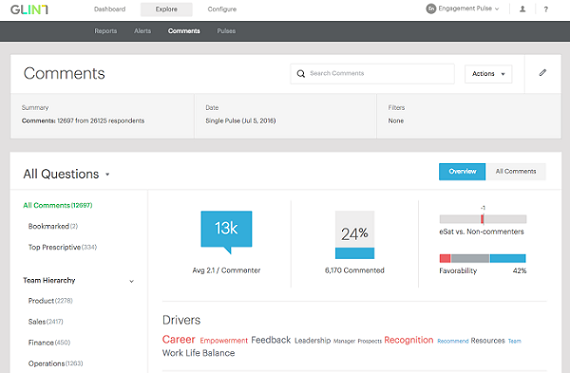 Glint is a real-time employee engagement platform that uses machine learning and artificial intelligence to help companies get the most out of their employees, and now it has added another $10 million to its Series C round. The funding came from from Bessemer Venture Partners.

That's in addition to the $27.2 million the company had raised in August from Meritech Capital Partners, Bessemer Venture Partners, Norwest Venture Partners, and Shasta Ventures, bringing the total round to $37.2 million. Glint’s total funding to date now stands at $60 million.

Glint is real time employee engagement platform that gives companies more insight into how their employees are feeling, and how motivated they are.

It allows companies to send out pulses, or short surveys, as many time as they want, which the company can then analyze and break down. For example, if a company only wants to see the answers from millennial women engineers who work outside the U.S. and who have been with the company for more than five years, Glint can provide information on that specific population.

Glint can use the data to score employees based on key drivers of engagement and is then able to provide its clients with predictive insights, such as which teams are likely to have attrition or performance issues. It doesn't just tell the company that's wrong, though; it will also send suggestions on how to improve those scores and how to build an action plan to fix the issues it may find.

Glint will use the new funding for hiring and expansion, Jim Barnett, co-founder and CEO of Glint, told me. The company recently opened an office in Lincoln, Nebraska and is currently preparing to surpass 1,000,000 employees on its platform in the new year.

"The new regional office allows Glint to take advantage of the growing technology talent and economy in the midwest and will house team members in sales, engineering, technical operations, and customer service. We'll also be focused on further developing the product," Barnett said.

When it raised its round over the summer, Barnett has said that the plan was to double its current number of employees in the next year. 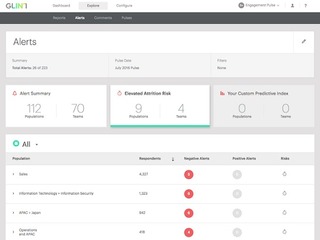