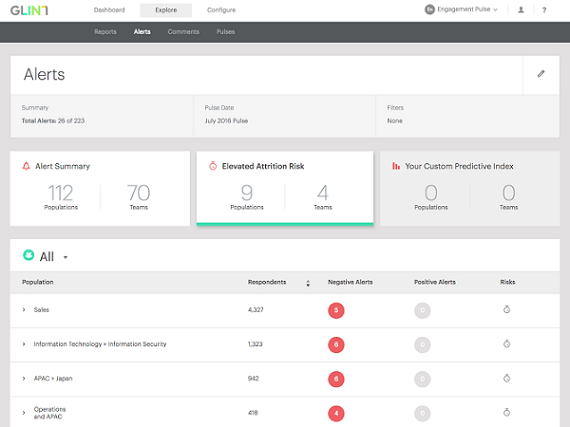 Writing about companies in Silicon Valley, I sort of get a sense of which companies people like working for, and which they don't, based on what people say and which have high turnover rates.

For the companies themselves, though, it seems to be hard to figure that out. Even as every other aspect of work has become real-time,  employee engagement is still stuck in the past, with most relying on an annual survey to get a sense of how employees are feeling.

Glint is a company that wants to modernize that process. It's a real-time employee engagement platform that uses machine learning and artificial intelligence to help companies get the most out of their employees.

The company announced on Tuesday it has raised $27.2 million in new funding. The Series C round was led by Meritech Capital Partners and Bessemer Venture Partners, as well as returning investors Norwest Venture Partners, and Shasta Ventures.

This latest round brings its total funding to date to $55 million.

Launched in February 2015, Glint is real time employee engagement platform that gives companies more insight into how their employees are feeling, and how motivated they are.

"We started this company with the insight that the work world changed radically," Jim Barnett, co-founder and CEO of Glint, told me in an interview. "As a CEO, I had a great dashboard for sales, and customer success. I had my finger of the pulse of every aspect of my business, but one I didn't have was the heath of the organization, and the engagement levels of my people."

Launched in February 2015, Glint allows companies to send out pulses, or short surveys, as many time as they want, which the company can then analyze and break down. For example, if a company only wants to see the answers from millennial women engineers who work outside the U.S. and who have been with the company for more than five years, Glint can provide information on that specific population.

Glint can use the data to score employees based on key drivers of engagement.

"We would describe engagement as the intellectual, emotional and physical commitment to an organization and its goals. Some refer to it as satisfaction, but its the time and effort that an employee will give to the organization and goals," said Barnett.

Glint is then able to provide its clients with predictive insights, such as which teams are likely to have attrition or performance issues. It doesn't just tell the company that's wrong, though; it will also send suggestions on how to improve those scores and how to build an action plan to fix the issues it may find.

All surveys are confidentual, and the company will only analyze data if a resulting group has at least five or more respondants, so the company won't be able to narrow down the criteria so narrowly to figure out who responded.

"We are all about business results. We help companies reduce attrition. One company, after only six months, saw a 26 percent reduction in regrettable attrition, which means people who have left who you didn't want to leave," said Barnett.

The company will use the new funding to build out its product, continuing to invest more heavily in machine learning and artificial intelligence. It will also go toward expanding globally, which means growing the team. Glint plans to double its current number of employees in the next year.

In the future, Barnett wants to move Glint into other areas of people success.

"I've always viewed Glint as a people success platform. Engagement is what were mostly focused on,but there's an entire employee lifecycle, including onboarding and exit pulses," he said.