KeyMe lets users store their keys in the cloud, and easily print them out via a kiosk 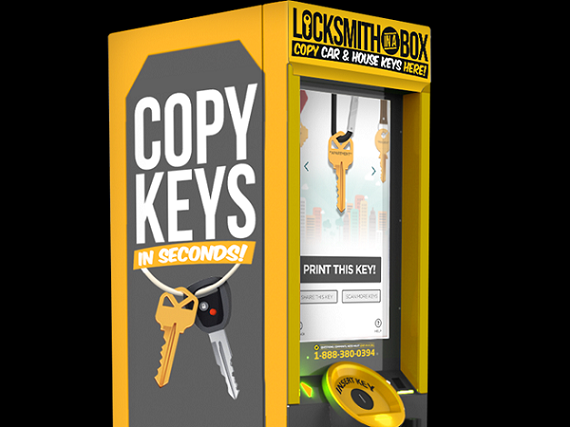 I've seem plenty expounding recently on the end of needing to carry around keys, which are apparently so burdensome that people just can't wait to throw them away. Instead, those people want our phones to unlock our doors, which I think this is just a terrible idea. Forget to charge your phone, or lose it along the way, and you'll be locked out.

That doesn't mean that the $7.5 billion locksmith industry isn't ripe for disruption, though. I just think that a company like KeyMe is more the way to go about it.

KeyMe is a startup that allows users to store, share, and duplicate their physical keys using a digital scan that is securely stored in the cloud.

The company announced on Friday that it has raised $15 million in Series C round of funding led by QuestMark Partners. All previous investors participated in the oversubscribed round, including Comcast Ventures, Battery Ventures, White Star Capital, 7-Eleven, Ravin Gandhi, and the Polsky Family Office, among others.

This new round follows the company's $20 million Series B round of funding that was announced in December 2015, and brings its total funding raised to $45 million.

The KeyMe App allows users to digitally scan keys from their mobile device. They can print their key at one of KeyMe's kiosk locations, or get a key cut by your local locksmith using instructions in the app.

In addition, KeyMe allows customers to save digital copies of their keys in the cloud. Customers can then recover a copy using their fingerprint at any of its kiosks. Users can also have keys mail ordered, and shared with family and friends. It supports the majority of key types including home, office, mailbox, padlock, Mul-T-Lock and select Medeco keys. It also supports over 70 percent of car keys at its kiosks.

When idea for KeyMe came when founder and CEO Greg Marsh was at Columbia, and his wife kept getting locked out of their apartment. Inevitably, she'd call an emergency locksmith, which Marsh wasn't too happy about.

"KeyMe set out to end frustrating lockouts and give people more control over their keys by allowing them to scan and save keys to the cloud and recover them with just a fingerprint if they are ever locked out. More recently, KeyMe has had its sights set on ending an experience many car owners are familiar with­­getting overcharged for a replacement key fob. These next­ generation kiosks can scan key fobs, which can then be cut in our office for a fraction of the dealership cost. We are hoping to give some control to key owners, as well as protect them from lockouts and save them some money," Michael Harbolt, vice president of marketing at KeyMe, told me.

"KeyMe's customer base really runs the gamut­­from folks worried about getting locked out to people who just moved to people who want to share a key with a friend. Because the experience of losing your keys is truly universal,­­ this is a $7.5 billion industry, ­­we have tried to create something for everyone."

The company is not only able to get keys to customer quicker, but cheaper too.

"Because of an explosion of bad actors in the emergency locksmith space, the average cost of an
emergency lockout is hard to quantify. While most advertise anywhere between $150 and $350,
customers have reported scammers overcharging them right on the doorstep to where the customer is
forced to pay even more. And as for car keys, our transponder and Fob keys start at $59.99, whereas
the average dealer charges anywhere from $250 to ­$500. The cost savings are really shocking," said Harbolt.

There are some obvious security concerns about uploading your key to the cloud. If someone hacks the system, can they make a copy of your key and come into your house? The company alleviates this problem by not storing information linking any key with a location or lock. KeyMealso says its deletes mailing address once the order has been shipped. So it would basically be like dropping your keys on the ground; someone might find them, but wouldn't know what door they actually opened.

"In the worst case scenario, where a hacker broke through our encryption, what they would see are numbers which represent geometrical features on of a key with no way to make use of that information," Harbolt explained.

In addition, all transactions are verified with a credit card, and the company requires email verification for mobile and fingerprint submissions for kiosk. KeyMe also provide real-time notifications any time new activity occurs on an account, so the user would know if someone made an unauthorized copy. All of that is designed to make it more difficult for someone to make a copy of a key without permission.

KeyMe says it will use the new funding to support its expansion plan to add more than 3,500 kiosks by the end of next year in retailers that include 7-Eleven, Albertsons, Bed, Bath & Beyond, Kmart, Lowe’s Home Improvement, Mall of America, Rite Aid, Safeway and Sears.

It currently has around 150 kiosks in the field right now across 20 states.

"There is no one in the world that is doing what KeyMe is doing today. While there are kiosks that can
copy your more basic brass house keys, KeyMe's robotics and artifical intelligence technology help
our key cutting machines learn from each new scan. This often results in copies more accurate than
the original," said Harbolt.

"Our next ­generation kiosks can support not just traditional automotive keys, which no other kiosk solution can do, but can also support boats, ATVs, scooters, RV’s and even tractors. We also have a mobile app that’s integrated with the kiosk, enabling you to save a key on your phone and print off a copy at the kiosk."

In addition to the new funding, it was also announced that Nick Superina, partner at QuestMark Partners has joined the company's board of directors. He is replacing current board member Jens Molbak, who served on the board since KeyMe's seed round in 2013.