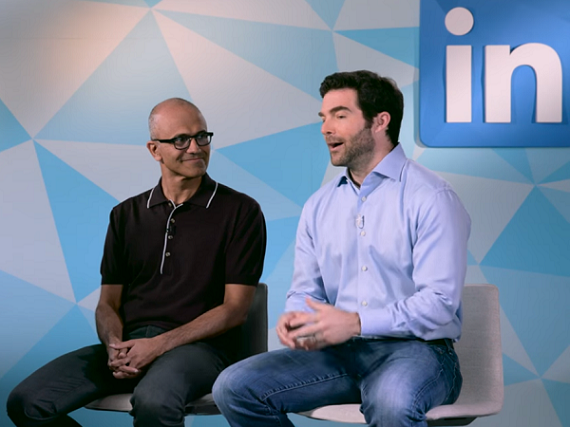 While the general consensus seems to be that Twitter is the social network most likely to be acquired, it actually turns out that another social network was also being courted.

Microsoft has agreed to buy LinkedIn, it was announced on Monday. The purchase price was for $196 per share, or 45 percent above LinkedIn's price before the deal was announced, and valuing the social network at $26.2 billion. That's more than the $21.8 billion Facebook paid for WhatsApp.

As per the deal, LinkedIn CEO Jeff Weiner will remain in his current position, reporting to Microsoft CEO Satya Nadella.

In an email sent to LinkedIn's staff, Weiner explained why the two companies will work well together going forward.

"In order to pursue our mission and vision, and to do so in a way consistent with our culture and values, we need to control our own destiny. That, above all else, is the most important rationale behind today's announcement," he wrote.

"Imagine a world where we're no longer looking up at Tech Titans such as Apple, Google, Microsoft, Amazon, and Facebook, and wondering what it would be like to operate at their extraordinary scale -- because we're one of them."

He also praised how the company had changed since Nadella took over Microsoft from Steve Ballmer in early 2014.

"The Microsoft that has evolved under Satya’s leadership is a more agile, innovative, open and purpose-driven company. It was that latter point that first had me thinking we could make this work, but it was his thoughts on how we’d do it that got me truly excited about the prospect," said Weiner.

As for LinkedIn employees, he told than that " little is expected to change," except for anyone who was working on maintaining LinkedIn status as a publically traded company. They, obviously, will need a new focus going forward.

"In terms of everything else, it should be business as usual. We have the same mission and vision; we have the same culture and values; and I’m still the CEO of LinkedIn," he said.

Nadella also sent a memo to his staff, in which he said that Microsoft and LinkedIn are "in pursuit of a common mission centered on empowering people and organizations."

He specifically focuses on how he could use LinkedIn's data to enhance Microsoft's Office 365 commercial and Dynamics businesses.

"Think about it: How people find jobs, build skills, sell, market and get work done and ultimately find success requires a connected professional world. It requires a vibrant network that brings together a professional's information in LinkedIn's public network with the information in Office 365 and Dynamics," he wrote.

"This combination will make it possible for new experiences such as a LinkedIn newsfeed that serves up articles based on the project you are working on and Office suggesting an expert to connect with via LinkedIn to help with a task you're trying to complete. As these experiences get more intelligent and delightful, the LinkedIn and Office 365 engagement will grow. And in turn, new opportunities will be created for monetization through individual and organization subscriptions and targeted advertising."

The transaction has been unanimously approved by the Boards of Directors of both companies, and is expected to close at some point in the next six months, though the deal is still subject to approval by LinkedIn’s shareholders, the satisfaction of certain regulatory approvals and other customary closing conditions.

Reaction to the deal

"While many shareholders will likely be pleased with the 50% premium in a tough year for a volatile name, we also note that LNKD has traded above $200 for a good amount of the last 3 years," Doug Anmuth, analyst at JP Morgan, wrote in a note.

"Accordingly, we believe the acquisition price reflects the value of a unique, well-positioned asset in the professional space, with limited direct competition, but also that LNKD’s core Hiring growth has decelerated, Sales Navigator adoption is slower than expected, and LNKD faces tougher comps into the back part of the year."

"If you think about it, it makes complete sense that Microsoft would go after LinkedIn, given what Microsoft plans to do in enterprise software," Omar Akhtar, managing editor of technology research firm Altimeter Group, told me.

"Microsoft has always been the office tech company, with Excel and Word, and now by buying LinkedIn, the most vlauable thing they gain access to is its social graph. They can see how members interact, how what content they consume, their workplace activities and conversations. It's a great place for Microsoft to be in to know what's happening in the workplace, and LinkedIn is where workplace chatter happens."

He sees the potential for a lot of sharing of data, which will help Microsoft in how it markets its enterprise products. In addition, it will also help Microsoft take on Google.

"Microsoft's biggest competitor is in office applications is Googe, which has no social graph that can be called the equivalent of LinkedIn's. They tried with Google+, with one login to sign in with all their products, but no one's on Google+. Microsoft lagged begind on cloud apps, but they'd caught up in a great way, and I see so many switching over from Google to Microsoft 365.