Invoicing, expenses, and other paperwork for self-employed workers all on your smartphone 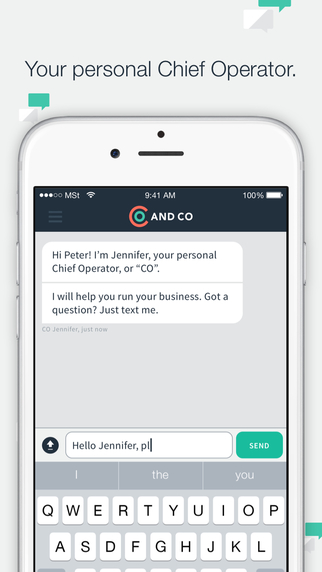 AND CO, provider of a smartphone app for freelancers' admin work, has closed a $2.5 million round of funding, according to an SEC filing signed and dated this past Friday.

Leif Abraham, one of the company's co-founders, reached out over email to confirm details of the round: it's made up of a $2 million seed round (led by Thrive Capital with participation from BoxGroup, Red Swan Ventures, and Designer Fund) as well as a $500,000 angel round from last year (led by BoxGroup with participation from Prehype, Brooklyn Bridge Ventures, Scott Belsky, Josh Abramson, Ricky van Veen, Neil Vogel, and Bjarke Ingels)

AND CO, says Abraham, is the next company to emereg from Prehype, which is essentially a startup incubator in New York. And Prehype lists AND CO in its portfolio.

Prehype also lists several of its portfolio companies that have exited, including Path (acquired by Daum Kakao), Hot Potato (acquired by Facebook), and Sunrise (acquired by Microsoft). Additionally, the incubator considers several venture capital firms its "close friends," including Index Ventures, Resolute Ventures, and RRE, so it's possible one of these also contributed to AND CO's new round.

Co-founded by two guys with a hefty list of experience serving both startups and creative agencies, AND COhas been hatched specifically to provide a platform for the new generation of freelancers. From 2014 to 2015, the amount of self-employed Americans grew by about one million to 15.5 million, according to the Bureau of Labor Statistics. And that number is expected to continue growing.

But while creative professionals, which these freelancers often are, might enjoy the flexible and dynamic work they carry out, it’s less likely they love the administrative work involved. That’s where AND CO comes in.

For $60 per month (though the rate is currently $29 for early subscribers), the company gives freelancers a smartphone app designed to efficiently handle invoicing, expenses, and other paperwork. For example, the app creates and sends invoices over to clients, will remind them if their payment is late, and then remind the freelancer when the billing cycle calls for a new invoice to be sent.

Additionally, the app integrates directly with the freelancer’s bank account, so it can track any expenses incurred as part of the business. The idea is to even make the tax filing a little easier when it comes around every year, as that whole process is a lot more arduous for 1099 (or self-employed) workers than it is for W2 (or full-time) workers.

Other features of the app include project and document tracking, templates for legal contracts, and reviews of companies by freelancers.

AND CO would be far from the first to offer these features to freelancers. Well-known services like Google Wallet, PayPal, and Zoho offer services for setting up and sending invoices, while other services like Wave and Anchor focus specifically on invoicing.

The interesting thing about AND CO is that its mission specifically seems to be gathering information on how companies treat freelancers. In addition to recording freelancer reviews and ratings of companies they’ve worked with (thereby validating the data), the app itself will also be able to track how fast the company pays after receiving an invoice. In other words, with enough traction, AND CO could be a sophisticated Yelp for clients.