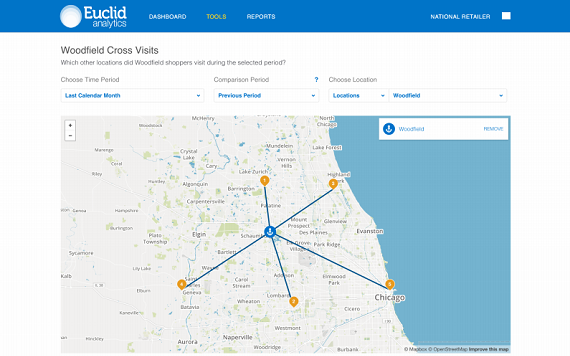 We hear a lot about the death of the physical store, and it's easy to see why. Try going to a Barnes and Noble or your local video store. You can't because they closed. But the reality is that  94 percent of transactions taking place within stores. So instead of pretending that those stores don't exist, the better thing to do would be to use technology to make them better.

That's what location analytics company Euclid does, giving storefronts insights into customer shopping habits, so the store can better optimize its marketing and sales.

This is the first funding that Euclid has raised in nearly two years; its last round, a $17.3M million Series B, came in February of 2013. The company has now raised a total of $44 million.

Founded in 2010, Euclid Analytics offers stores a platform that "helps its customers sees how people interact with phsyical places, and how they relate to one another," Brent Franson, CEO of Euclid Analytics.

It gathers insights and information about store shoppers, including how shoppers spent in the store, and how long lines in the store were. Euclid then reports this data back to the retailer so that it can use it to optimize the performance of their marketing, merchandising, and operations, as well as boost traffic, engagement, loyalty, and revenue.

While the company used to uses sensors placed inside retail store to get this information, now the company requires no hardware, and integrates with existing WiFi in store. Upwards of 80 percent of retailers currently have WiFi in their stores.

Euclid works with every major Wi-Fi vendor and can be rapidly deployed across existing Wi-Fi systems from Aerohive, Cisco, HP/Aruba, Meraki, Ruckus and Xirrus.

"There's a variety of things that can be done with the data we collect. There's the operational piece, which can mean changes to staffing, and better understanding the store layout. It can be used to try different store designs, and compare how they behave, and see which are more effective. It can used for changing window dressing, to better capture people," Franson said.

"There are also marketing use cases. The economics of the traditional retailer are that customers a re expensive to acquire, so part of our effort is focused on that. It's also current customers, and convincing them to come back and to spend more. We offer EventIQ, where retailers can run marketing campaigns, look at a  period and see what percentage came back, and see how it's different from other campaigns."

Since it's last funding round, Euclid had grown its footprint, and is now in 25 times more stores than it was in 2014. Its serves over 500 brands in 65 countries across tens of thousands of locations, though it does not disclose the exact number.

This latest funding will be used to expand its current 40 person team, hiring sales and marketing, as well as engineers.

More importantly, it will go toward product development, specifically it's omni-channel solutions that understand customer behavior across online and offline channels.

"Current investors are really excited because we are growing so rapidly but also because of our future vision. One of the things we're adding to the product is opt-in capability, helping retailers get a single view of customers, including what's happening offline and online," said Franson.

What that means is that the user would log into the store's WiFi and give permission for the store to collect data off of their phone, unlike the other way, where all data remains anonymous. Instead retailers would be able to know what the customer had previously purchased, as well as push them coupons, making shopping more personalized.

Ultimately is solves a big problem for offline retailers, who don't know who is in their store.

"This is how we're thinking about logged in experience for physical world. Amazon or Netflix, you're logged in, and they know what movies you're watching, so they recommend and make it more efficient for you. That's one of the reasons those businesses are so successful," said Franson.

"We want to bring that data driven personalization to the physical world. Customers would log into the WiFi because there's some exchange of value. Retailers know you're in the store, so they can make better recommendations based on purchases you've made in the past. It's more efficient and pleasant because its based on information."

Of course, Euclid is cognizant of the whole potential problem of privacy, and so it has been talking to customers to get their opinions. So far, Franson said, they seems to love the idea.

"People love it. They want that experience, especially if they are a  brand loyalist. We want them to have more information to have a better experience."

He also acknowledged, though, that it might take some getting used to.

"It's very normal, at the beginning of something like this, for their to be sensitivity. We are very sensitive to privacy, especially since it's new technology and a new experience. When Caller ID came out, there was some sensitivity, but eventually people realized that it wasn't so so bad, and was even convenient. As people became more comfortable with that, it was more widely adopted. I really believe in building so much value and we want to make consumer experiences in the physical world much, much better."

Right now the product is in oversubscribed beta. with a few customers, and Euclid will be pulling it out of beta in the first half of this year.

Ultimately, Euclid's goal is to marry the offline physical retail world and the online retail world.

"We  want to be big part of the shift as customers evolve to live in a world where the vast majority are influenced by their phones, by what's online and what's happening in the physical world. We are optimizing their assets for strengths and weaknesses. The physical store is good for experiencing products. That is the strength of the real world," said Franson.

"The online focused retailers that win and dominate will be the ones master both, not online only or offline only. The future king or queen will offer a unified experience online and offline with optimized assets. We are focused on being the backbone platform, giving them a single view of the customer and we have the data to drive decision making. To build a really beautiful and sustainable business, retailers have to be omni-channel in a  mobile first world." 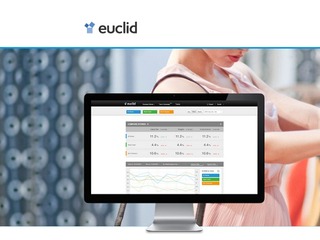