Google had five of the fastest growing apps in 2015, but has struggled with its messaging services 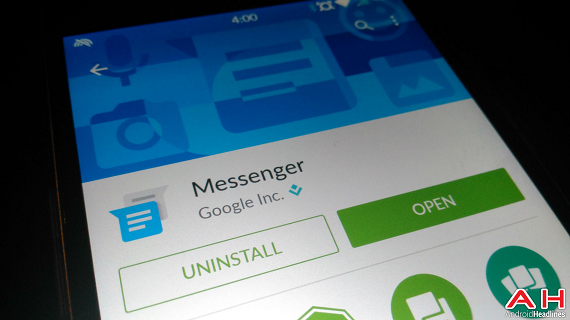 There are a ton of mobile messaging apps out there now, including WeChat, Line, Kik, WhatsApp and Facebook Messenger. Those last two are both Facebook properties, and that company has done really well in the space. Google, on the other hand, has not. While it has a couple of messaging services, Hangouts and Messenger, neither of them has proved to be all that popular.

That doesn't mean that Google is about to give up on the space, though. Actually, quite the opposite.

The company is said to be developing a new messaging app, one that will put a greater emphasis on artificial intelligence, according to a report out from the Wall Street Journal on Tuesday. It will also rely on “chatbots,” which will allow it to talk directly to users and help answer their questions.

Those chatbots will likely come from third party developers. They will allow users to ask questions through a text. Those bots will then scour the web for information and provide users with answers to their questions.

The development of the app is being led by Nick Fox, Google's vice president of communications products. What the service will be called, and when it will be available to use, are currently unknown.

VatorNews reached out to Google for confirmation of this new app, but a company spokesperson declined to comment.

What's interesting about this news, on top of Google attempting to, once again, enter a space where it has typically struggled, as it did with social media and Google+, is who it's trying to emulate.

The inclusion of artificial intelligence in its new messaging app brings to mind "M," the AI component introduced in Facebook Messenger this past summer.

So far details about this new Google app are few and far between, so its unknown if Google will go a similar route, and add that human element, or simply rely on machines for those interactions.

The other main part of the new app, Chatbots, seem like they will be the future of messaging apps. Earlier this week mobile messaging app Kikacquired fashion advice bot Blynk, and put the team to task developing more bots and chat assistants to cater to its core audience of teenagers.

Even with these features, Google has a steep hill to climb when it comes to succeeding in mobile messaging.

Facebook was able to do it by successfully building up a core audience on its flagship app, then essentially forcing them to download a separate chat app to use the messaging service. The plan worked like gangbusters, as Facebook Messenger was recently named the fastest growing app for the third time in the last four years, and it now has 96.4 million average unique users.

Google had five of the fastest growing apps this year, including YouTube, Google Search, Google Play, Google Maps and Gmail. With so many other, extremely popular messaging services out there, it maybe prove to be extremely popular for the company to replicate that success.