Earlier this year, Presidental contender Donald Trump (ugh, I feel so dirty just writing that) called out Silicon Valley, and Mark Zuckerberg in particular, over its immigration policy. That was back when Trump's Mexicans were the main targets of his attacks. Remember those days?

Trump has, of course, moved on to other targets since then. The new marginalized group he is trying to demonize and isolate are Muslims. Earlier this week Trump made waves when he proposed a “total and complete” ban on Muslims entering the United States, something that even Dick Cheney found to be morally repugnant.

Now Zuckerberg has taken the chance to hit back at Trump, without even saying his name, writing a Facebook post on Wednesday in which he made it clear that he, and Facebook would be vocal in their "support of Muslims in our community and around the world."

"After the Paris attacks and hate this week, I can only imagine the fear Muslims feel that they will be persecuted for the actions of others," he wrote, explaining that his religion had helped him understand what it means to when a group is attacked the way Trump has gone after people of the Muslim faith.

"As a Jew, my parents taught me that we must stand up against attacks on all communities. Even if an attack isn't against you today, in time attacks on freedom for anyone will hurt everyone," said Zuckerberg.

Finally, he unequivocally voiced his continued support for the Muslim community on Facebook.

"If you're a Muslim in this community, as the leader of Facebook I want you to know that you are always welcome here and that we will fight to protect your rights and create a peaceful and safe environment for you," said Zuckerberg.

"Having a child has given us so much hope, but the hate of some can make it easy to succumb to cynicism. We must not lose hope. As long as we stand together and see the good in each other, we can build a better world for all people."

It's likely that Zuckerberg will receive some backlash for this, specifically from Trump supporters, and from people who will want him to do more. After all, he was criticized when he announced he was giving all of his money away, so it's very likely he will be criticized for this as well.

But, for rational people, it's hard to argue with the message, and this is certainly the right format for this type of outreach.

Social media can be a powerful weapon against oppression, as networks like Facebook and Twitter have been credited with helping galvanize people to protest against their governments. It's also the reason that so many countries shut off those services at the first sign of trouble. With Facebook's 15 billion users, it can help connect people from all over the world, and understand that people aren't our enemies even if their country doesn't like us.

Of course, there's a flipside to that, and those same networks can be used to bring together people who want to do harm. It was recently revealed that the two terrorists in San Bernardino last week had used social media to coordinate their attacks.

Earlier this week another major Presidential contender called on companies like Facebook to help fight ISIS by denying terrorists "virtual territory" and by doing what they can to "shut off their means of communicating."

What Facebook, and other, are going to have to do is keep their networks as open as possible for the vast majority of good people, while also keeping an eye out for those who are not. 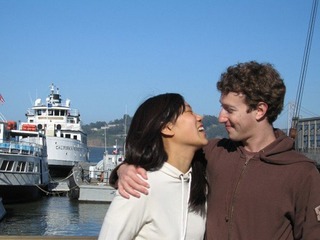 Zuckerberg and Chan have a long history of charitable giving