Vinod Khosla: companies need a good base camp to succeed

Too many VCs don't provide good base camps in order to make companies safe and predictable, he said 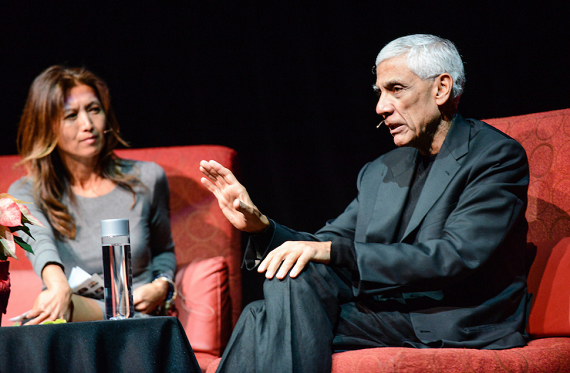 Khosla had spoken about his feeling about entrepreneurs, and their preferred level of ambition, but he was also critical of other venture capitalists, who he said do not bring value to companies, and who might actually be hurting them.

He used the analogy of climbing Mount Everest, comparing it to building a company.

"A great approach to investing in a company is company that has a good base camp. That means you have business you can get through that's a decent, stable business. But usually that will result in decent returns, not great returns, from the investor side, or the entrepreneur side. So, I sort of like people who think big and act small or another way to say, people who think about climbing Everest, but they're geared toward base camp. The big 10x return comes going from base camp to Everest, but if you don't go to base camp first. you're not being realistic," he said.

Most venture capitalists, though, are too risk averse, and they actually wind up hurting their companies in the process.

"On the flipside, I've sort of said most VCs add no value. Enough VCs are scared of ambitious entrepreneurs that they talk them into less ambitious plans. That means they get to base camp but base camp set up without insight for how to ascend Everest is a bad base camp. You can have a good base camp or a bad base camp, a good base camp gives you the assets to get you learning about, or assests, that say, 'Here's how you a make business model'," said Khosla.

"Most more returns in the VC business come come from going from base camp to Everest, and I find most VCs, in order to make a company safer or more predictable, reduce the possibility of getting to Everest. That means they think of base camp as a goal, not the immediate goal. I like to say, what frustrates me is when people reduce risk to the point where the probability of success goes down. Where the consequences of success are inconsequential. I don't mind a higher probability of failure, but the consequences of success being very inconsequential."

If the entrepreneur and VC are aligned, though, whats wrong with being conservative? Francisco asked. To put it in baseball terms, what's wrong with hitting a single as compared to a home run?

"There's nothing wrong with being conservative, and it makes sense for certain people. It's not where the returns in the VC business come from," he responded.

He also said he didn't like the baseball analogy "because you can get a single or a double and get from second base then third and then home or go for a home run swing, and I'm not suggesting a home run swing. I'm sort of suggesting that Everest analogy because there's a huge difference between base camp and Everest. But the bases are all 90 feet apart."

Entrepreneurs and their investors need to start out going for something achievable, before trying to conquer the mountain.

"People who go for Everest directly seldom make it, but if you look Uber, for example, because it's such a visible example, they went after a fairly narrow baseline, of people wanting black cars in a different way. They weren't even going after the taxi business. Now they are going after all of transportation, maybe all of delivery and all of everything else. That's a pretty good strategy," said Khosla.

Companies need to find a goal that is "achievable in way a that collects valuable assets on the way to achieving something much larger. That's the base camp in the right way."

Licensing technology to collect revenue, on the other hand, is a bad base camp "because you're not learning how to go to market."

"VCs who wont help an entrepreneur think the right way, because our style of investing in one very large bet is not appropriate for every entrepreneur. That is not the right math for everyone. If you're really going to be ambitious, then I think 90% of VCs turn you into something that can be sold for 2 or 3x their money, and their too conservative or they're not focus on building the right team. You can't do an ascent of Everest without the right team."