Vinod Khosla: founders should be realistic but ambitious

If an entrepreneur is focused on valuation, that is 'the wrong way to look at a company' 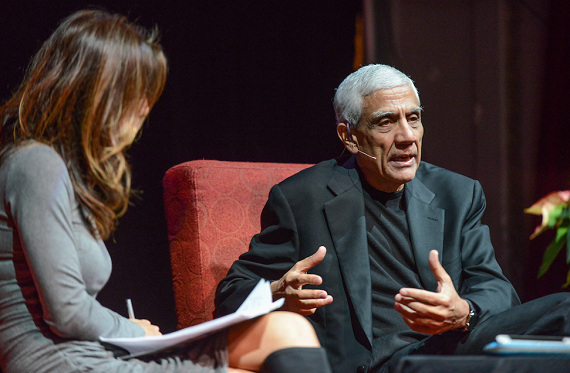 The conversation started with Francisco pointing out that Khosla had led Series A rounds in 11 different companies that went on to have $1 billion exits.

Khosla seemed to bristle a little bit at this, saying "frankly, that almost doesn't matter. It's the wrong way to look at a company."

"There are lots of ways to get billion dollar valuations that aren't good ways to get billion valuations. It's funny, yesterday I was talking to another VC and they were talking about a $10 billion company and I said, 'Not revenue, it should be revenue.' And they were speaking to valuations, and I said, 'Fundamentally wrong to focus on valuations.' If you've got a public company, your valuation changes very easily, but your basic business does not change," he said.

"Valuation is about perception, the business you build is about the long term value of what you create. I always tel entrepreneurs, 'First, valuations can be important in lowering dilution, raising money, that kind of thing, but your primary goal should be what's valuable about your company.' Revenue is one metric, but there are many other metrics. What kind of team are you building, how unique is your offering, how unique if your IP or technology? Focusing on valuation often leads to the wrong goals for entrepreneurs."

But, Francisco pointed out, it's harder these days for companies to raise a Series A, with only one out of 10 companies managing to close. So why shouldn't they take as much as they can, even if that comes with that higher valuation?

"I'm not saying valuations are not important but they are peripheral to the long-term success of your business. So they're important in fundraising, but the most important thing is what kind of assets are you building so your business survives three, five, seven years? People who focus on valuation lose focus on what's the primary drivers of their long term success," he responded.

"If an entrepreneur is unrealistic about how much money they want to raise, for example, or what valuation they want, it tells us a lot about the quality of that entrepreneur. Many people are so unrealistic that you say it's not even worth meeting with them. Every single thing you do as entrepreneur gets judged. The quality of your deck, how approach people, what you say you want, all those are important. By the way, if you ask for too high a valuation, or too low, it's a bad mark on you."

So should they not even ask for a valuation?, Francisco asked.

No, Khosla responded. What he wants is for companies to outline the most important risks they have over the next 12 months, and say how they will eliminate them, what their strategy is for that, and how much money they need to do it."

"Being unrealistic is a bad idea, but being unambitious is a bad idea too. Just yesterday we were looking at a company, they had very good technology, and what I would call a  plan that was too sensible. That means it didn't show enough ambition. So they built a good business, but for the technology they had they should have been shooting for an awesome business."

Stay tuned for the next piece, where Khosla talks about the other side of the equation, and VCs who don't add value to their companies.