The company works with over 850 brand, including Louis Vuitton, Victoria’s Secret, Vox and Birchbox 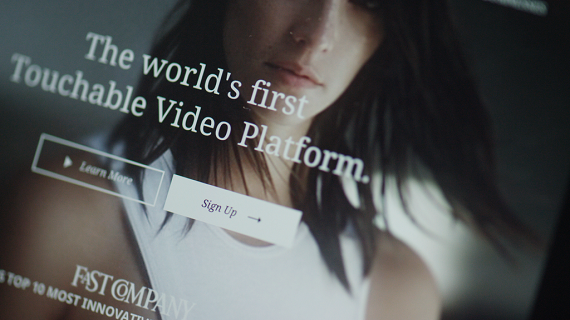 The Internet, and social media especially, are becoming increasingly shoppable. Sites like Facebook and Pinterest are creating more ways to purchase things from their platforms through buy buttons.

That's the idea behind touchable video platform Cinematique, which announced on Thursday that it has closed $3.5 million in a funding round led by Pumori Capital, an investment advisory firm founded by former Credit Suisse Asset Management executives.

The company makes touchable, shoppable video that allows viewers to touch, tap or click on any item they like in a video as it moves across screen. Viewers can continue watching a video but dive deeper into additional content and product information at their own convenience.

Viewers can sign in, save and collect everything they touch to get item updates with new content, products and sales.

"The problem is video is a lean-back experience, where the benefit to viewers, and by extension content creators, ends when it is finished playing," Randy Ross, co-founder and CEO of Cinematique, told me.

"We’re creating a more personalized and actionable video experience beyond the inciting view. We do this by making it easy for brands and content creators to create exciting, valuable items within the videos and by allowing users to touch, save, and revisit everything they touch at anytime."

"Content creators of all types find benefit from Cinematique. We help brands, publishers and content providers create, collaborate, and another dimension to their videos. In the past, we’ve worked primarily with fashion, media and enterprise companies," said Ross.

Cinematique's value to them comes in the form of giving video creators and brands deeper insights into what people actually want.

"Video content is being consumed at an exponentially accelerated rate. Our customers dedicate large budgets towards video creation but have very little understanding of how to achieve or measure ROI, nor do they understand the true interests of their viewers. Other platforms rely on comment feeds, programmatic ad serving around videos, or just views to measure sentiment and generate ROI," Ross said.

"At the end of the day, it is not a lot of data and quite ambiguous after it is all combined together. Cinematique adds personalized value to the viewer that is transferred into very succinct and realistic ROI measurement for our customers."

Currently the company is in private beta of its Cloud-based Editor, which makes creating touchable video "as easy as tagging a photo on Instagram for everyone."

The funding will be used to further invest in Cinematique's product innovation, as well as to expand into global markets, "specifically into Asian markets where we already have a strong impact."

"Cinematique is an experience first company – everything we do is contemplated from a creative human interface perspective while we're engineering the functionalities. As filmmakers and engineers, we know that a technology like this needs to be seamless and additive to visual storytelling," Ross said.

"We’ve taken responsibility for ubiquity, user experience, and ease of integration, so interactive video can finally graduate from being what has been known as a one-off agency creation model."

In addition to the funding, it was also announced that Manny Vinea will join the company’s Board of Directors on behalf of Pumori Capital. Other members of the board include Ross, Cinematique co-founder Kyle Heller, and Karl Alomar, COO of Digital Ocean.

Cinematique is the world’s first touchable video platform, changing the way the world experiences video. Founded by filmmakers and technologists, Cinematique believes in a deeper, more personal way to consume video in the connected age. The company is headquartered in New York City with offices in Los Angeles and Hong Kong.

Cinematique is a Fast Company Top 10 Most Innovative Company in Video, alongside Disney, Dish Networks and Vimeo, and ranked as 100 Most Creative People in China.