TestCloud becomes test IO, raises $5M and expands to the US 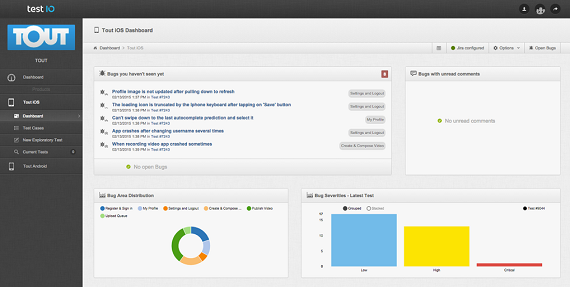 TestCloud, a self-service crowdtesting platform for app and Web developers, has a new name and a big new round of funding, the company announced on Wednesday, all to facilitate a big expansion into the United States.

Now known as Test IO, it raised a $5 million Series A round of funding from Turn/River Capital, a San Francisco-based firm that invests in growing technology, web and SaaS companies.

The company had previously raised a seed round of $1.5 million, so its total venture capital raised is now $6.5 million. Previous investors included Heilemann Ventures, IBB, Richmond View Ventures and a group of serial entrepreneurs.

The Berlin-based test IO specializes in Continuous Testing for agile software development. Founded in 2011, it spent time in an extended MVP phase and launched the main self-service product in 2013.

"Test IO makes it possible for development teams to create better software by improving the productivity and coverage of their quality assurance teams without having to hire more engineers or buy dozens of devices. The crowd of professional testers around the world is the key to on-demand testing by humans," Thomas Gruederich, Chief Sales Officer and co-founder of test IO, told me.

More than 500 developers, quality assurance personnel, product managers and others currently use test IO’s self-service platform to connect to a crowd of over 20,000 qualified software testers worldwide.

"The typical test IO customer has mobile apps or websites where quality and security are essential, but their internal software testing needs help to keep up with growth. They use test IO so they can be certain their products don't have bugs on certain devices or system versions," Gruederich said.

The company helps its customers save both time and money, by allowing companies to test more software combinations without having to add new people.

"Quality assurance is hard for everyone, and for companies that are scaling up, developers or in-house testers can't test all possible permutations and combinations of software and hardware that their users have. test IO also costs 30% less than adding more QA staff, without any sacrifice in quality."

In addition, according to Gruederich, the company has better testers than its competitors

"First and foremost, test IO's testers are a cut above everyone else's crowdtesters. We invest a lot of effort into our testers and our tester community," he said.

"Beyond that, we offer deep integrations into development teams' workflows so that using test IO's self-service platform to test their latest software build or version with real people is as easy as running automated tests."

The funding will be used to accelerate the company's growth, including its U.S. market launch and company-wide rebrand. It will also go toward hiring developers, marketing, sales, finance, and other roles in Berlin and San Francisco.

"The U.S. is a huge and influential market for software development, so there are a lot of companies that test IO can help," Gruederich said.

It was the expansion to the U.S. that also facilitated the company's name change.

"We renamed ourselves because the name test IO more accurately reflects who we are and what we do. We're still the same company and still passionate about making software better," he told me.

"In the next five to 10 years I think we'll see the company itself having made a name for itself in global software development market, and I imagine that this idea we're built around, that continuous testing by humans through an integrated self-service solution is the most efficient and smartest way to do QA, will just be the normal way that all software is developed."