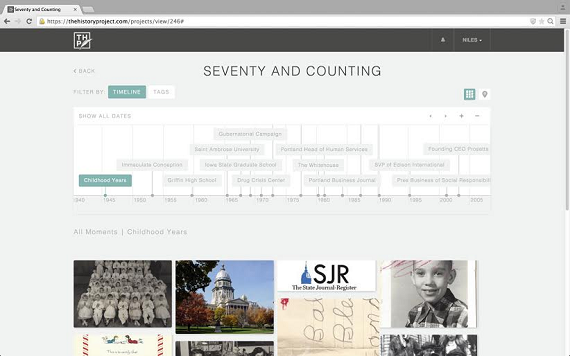 I moved to the Bay Area in January of this year, and spent my first three months in my new city unemployed and living in a hotel, answering job ads all day. I also used the time to look up old family records on Ancestry.com. I found all of these cool old documents about my family history, including my great grandmother’s naturalization papers, which led me to find a picture of the ship that she took to get to America in the early part of the 1900s.

The thing that I found, though, was that Ancestry was kind of impersonal. I didn't have a way to easily share information, or a way to get anyone else to contribute to what I was finding. It was pretty exciting to find all of this information about family that I had never met, but I wanted other members of my family to also experience it.

That is where The History Project comes in. It is seeking to be a modern reinvention of the time capsule, and it announced on Wednesday that it is coming out of private beta with $2 million in funding.

The round was led by The New York Times Company, with additional investment by Matter Ventures and Altpoint Ventures, as well as several angels. The company had previously raised $500,000 in a friends and family round.

The History Project connects memories and artifacts, which have been scattered over various digital, social, and physical platform, allowing users to collect them in order to collaborative, and interactive life narratives.

Users can import media, including YouTube clips, Facebook posts, even maps that can be layered on top of each other to see how multiple generations have crossed each other.

"We allow users to create an interactive mosaic, including things like e-mail exchanges and PDFs. Our history is across moments that don’t fit in just Gmail, Flickr and Facebook," Niles Lichtenstein, CEO and co-founder of The History Project, told me in an interview.

"We want to have multiple voices resonating, because history is the content we create and the media we consume."

The creators of the timeline can send out invitations and have others contribute, or simply allow them to view the timeline, which will automatically default to private.

"We want to make sure people tell authentic life stories, so if you're including, let's say, a poem you wrote during a tough time, you might not want to share that. But you can make it public," said Lichtenstein.

Lichtenstein developed the idea while perusing his late father’s record collection, and his old turntable.

"There was early Eagles, Beatles, Motown, and that brought back a ton of memories. Through that music it was like he was reaching out and connecting. I began wanting to understand who he was, how he would make decisions, his legacy and that started my personal journey," he said.

So he went through his father's old address books, scanned items, digitized them, and found that finding information online was both time consuming and tedious.

"At the end of the day, a Dropox folder with clickable media files didn’t feel like way I wanted to bring this together, and share it with mother and my fiancée. So this became my passion project, for myself and my co-founder, who was becoming a first time father. Like a lot of parents he used Gmail as a way of sending information and attachments, but we wanted a better way to chronicle that in a way that was multi-format and a sensory curated narrative with context."

Founded in 2014, by the end of last year it had built a prototype, after which it applied for the Matter incubator and was selected as one of six companies out of the over 300 that wanted to get in. It opened The History Project in private beta, where it had 600 customers.

"We could have gone into public beta, but we saw that this was working well, we were taking in users, and already working with major organizations, so we opened it up to everyone," said Lichtenstein.

While the company is focused on the consumer side of the equation, it has also found that the enterprise side of the business also have a need for the product as well, and so it has partnered with organizations, including The Dallas Morning News, to help it celebrate its 150th anniversary.

"They might use it for their own personal archives, or for internally onboarding new employees by explaining the company culture and its themes, or externally for marketing purposes and connecting clients with the history of the organization," Lichtenstein said.

"We might eventually have a special enterprise offering, but so far we have that enterprises that have started to use it are satisfied with being able to embed projects within their site so they can reinvent their 'about us' section."

Another important aspect of the business is its Concierge service, in which a storyteller will work directly with users to help them create timelines.

"We had users who came to us and said they liked to use platform on their own, but that they really want this for their father or mother and they don’t have time to spend with it, or the resources to help them. So we are taking talented writers and journalists, highly educated, people, and giving them the opportunity to train folks who need more support," Lichtenstein explained.

The company will use the funding to grow its platform, attract additional partners and scale its History Concierge service.

"We have a couple of celerity partnerships, because they really want to be able to control their narrative, including one with Jewel, so we also someone on the business development side," said Lichtenstein "We are also working with independent living communities with a pilot in senior centers where they can learn technology through The History Project, and we want to be able to able to cater to them so they can tell better life stories."

As for the increased number of Concierges, that will depend on how it grows and success of that pilot. There is currently one in Boston, one in Los Angeles, one in New York and two in San Francisco.

Lichtenstein's vision of the future of the History Project is to create a platform that truly creates a window into the past.

"The core of what we’re doing is that we really believe history is one of our greatest human resources. Right now we are capturing, which has become ubiquitous, and posting, but we need that next set of tools to organize and to curate and re-experience those memories," he said.

The idea is to capture the physical space. So if someone finds a picture of their of grandfather’s watch, I can 3D print. Or if they find the original notecard with their grandmother's fried chicken recipe, they can put in music she would listen to, to know how she cooked, and even incorporate digital smells

"We would love to be the place where people are experimenting with the most authentic memories and stories possible, and creating a collective perspective. Social media is not always social, and not always connecting us. We want to create real human connections.”