Users can create polls about anything they want, but Twitter doesn't say how it will curb abuse 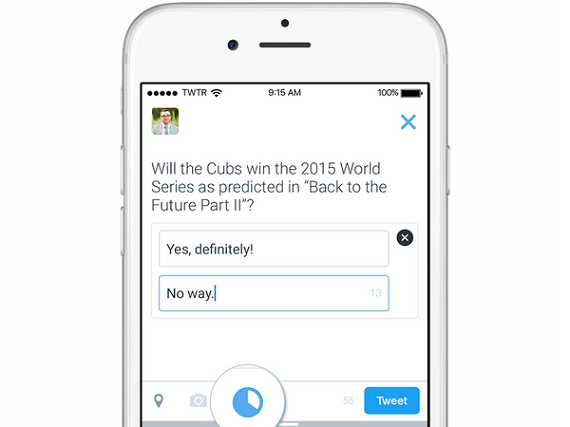 Ok, here's a question for you: do you actually care what other people think about things? Think about that seriously. When it comes down to it, do the feelings of other people on issues you care about, whether it be political or otherwise, actually matter to you?

For me, personally, the answer is pretty much no. My personal beliefs are my own, and I suspect that at least half of the world disagrees with me, and that's perfectly ok with me. If you do care about what the masses think, though, then Twitter has a new feature that's right up your alley.

The company announced on Wednesday that it's rolling out the ability for any of its users to create a poll about anything they want.

Coming soon! We're rolling out the ability for everyone to create polls on Twitter: https://t.co/pH5a8q9Ujz pic.twitter.com/ijAKEMUdf1

Once created, the poll will stay up for 24 hours, and can only contain two choices. Any user can vote on any poll, whether they follow the creator or not, and how they voted is not shared publicly.

Twitter has created features around voting before, such as Tweeting questions and tracking replies, tallying hashtag votes, or asking followers to favorite or Retweet to vote. This, however, is the first fully realized feature of its kind for the company.

"If you want the public’s opinion on anything — what to name your dog, who will win tonight’s game, which election issue people care most about — there’s no better place to get answers than on Twitter," Todd Sherman, project manager at Twitter, wrote in a blog post.

"For poll creators, it’s a new way to engage with Twitter’s massive audience and understand exactly what people think. For those participating, it’s a very easy way to make your voice heard."

One thing that Twitter does not mention is what, if any, restrictions will be placed on polls. If someone creates a poll that is racist, for example, or one that targets a specific person, Twitter does not say if it will be giving users a way to report polls that may be abusive or offensive.

Sadly, given that this is Twitter, a network that has come to be known for bullying and group think (don't believe me? Ask Justine Sacco) I predict that it will not be long before either of those things happens. And Twitter should be taking steps right now to make sure they curb it right away.

VatorNews has reached out to Twitter for further comment. We will update this story if we learn more.

Polls are just the latest way that Twitter, and new CEO Jack Dorsey, are attempting to create an environment of inclusion for the site, one that allows more people to participate and feel included on the site, without being intimidated.

Engagement levels for Twitter have historically been skewed, with a small percentage of users creating the majority of the content. A feature like polls allows the rest of the community to easily participate, and feel like they are part of the discussion.

As long as Twitter does not let it get out of hand.