Reflektive raises $3.6M to shake up the performance review

The company lets employees give continuous feedback and recognition, rather than once a year 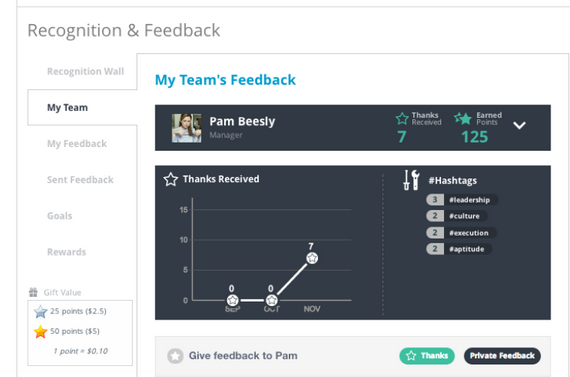 People get really stressed out when it comes to feedback at work. If their boss is giving them too much feedback, they think it means they are doing a bad job. If they don't get any feedback, that means that their boss doesn't care about them, and that's probably even worse.

The thing is, though, that's it's not about the amount of feedback, it's about the quality. Are they being told what they can do better, and what they are doing well? It has to be constructive and, ideally, it would come not just once a year at a performance review.

That is the idea behind Reflektive, which announced on Thursday that it has raised a $3.6 million seed funding round led by Andreessen Horowitz, specifically from its General Partner, Lars Dalgaard, who was founder and CEO of Successfactors.

The company had previously received $500,000 from the founders of Playdom, giving it $4.1 million in total venture funding.

Reflektive wants to change the way the feedback process works by being a communication platform for employees to give each other continuous feedback and recognition, rather than only having it done one time per year. The data is then compiled at to pre-populate a performance review.

“We’d like to kill the performance review," Rajeev Behera, CEO of Reflektive, told me in an interview.

"What we mean by that is that we want to get rid of the yearly performance review and make feedback  more organic and ongoing. It's impossible to improve if you hear feedback once a year - you need to hear feedback throughout the year," he said.

"When feedback becomes a regular part of a company culture, it becomes something that engages and motivates employees to improve - rather than the yearly performance review which causes anxiety and is demotivating.”

Reflektive currently has 50 customers, including Pinterest, Glassdoor, Lyft, Optimizely, Instacart and Thumbtack. Since January 2015, the company has grown revenue by 350 percent.

“A typical customer for Reflektive is an organization that is looking to engage and develop their employees through real-time feedback. We love working with companies that value their employees and want to see them improve and grow," said Behera.

The value that the company brings is building better relationships between managers and employees, by giving managers the tools to better develop their employees.

"The ROI is higher employee engagement and productivity. Also, we reduce the time spent on annual reviews, since the ongoing feedback captured throughout the year is used to pre-populate reviews," Behera said.

For example, Deloitte once mentioned that they spend 2 million hours a year on reviews. When broken down in terms of salaries and opportunity, that becomes extremely expensive.

Whereas traditional HR software has been built for HR, and not for employees, Reflektive's goal is to build a more engaged workforce, and to that it makes these systems organically driven by employees rather than HR. That is why Reflektive makes it software for employees, and not HR departments.

"We focus on building highly engaging experiences that create value instead of taxing employees like traditional HR software is known to do," Behera told me.

“Reflektive is the only HR platform that employees use throughout the year, without being asked by HR. Because of this, we are the only company trying to evolve performance management into a more simple, ongoing process."

The company's new funding will be used to continue the development of Reflektive's product, as well as to build out its team. Reflektive is also looking to expand upon its current integrations , which include Gmail, Slack and Outlook, to also include Salesforce, Zendesk, Jira and HubSpot.

Ultimately, Reflektive's goal is to take the fear out of the performance review.

“A lot of people dislike the annual review. Reflektive not only provides an alternative that fits better with the way people work now, but we also provide the opportunity for change management," said Behera.

"Customers can start with an annual review, and add real-time feedback to augment it. Then after they feel comfortable with that, they can remove the annual review, and replace it with only real-time feedback and what we call 'check-ins,' which are conversations around performance between managers and employees. By servicing both the old annual review and the new way of giving feedback, we make it easy for customers to make the transition at whatever pace they choose."