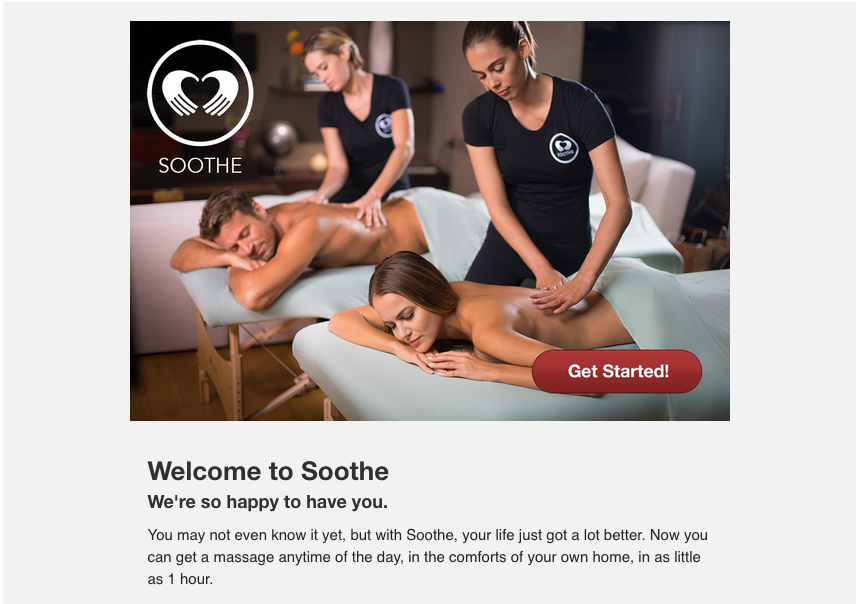 If there's a service that I often book with little time in advance, it's getting a massage. It's hard to predict when you're neck or back will ache, and when you have a free hour. So I often call on-demand, though invariably, I have to wait a few hours to get in.

Now there's Soothe to the rescue, where you can request a massage therapist and have a massage at your home in an hour. That is, if you're lucky enough to have Soothe in your town.

No matter, pretty soon there'll be a Soothe available by you. The LA-based startup, which refers to itself as a mobile massage service, just raised $10.6 million, led by The Riverside Company. Much of the funds will be used to get the word out. "We'll spend the vast majority on user acquisition through marketing," said Merlin Kauffman, CEO of Soothe. For example, don't be surprised if you start seeing Soothe ads on a billboard or hear Soothe ads on radio.

Kauffman, who's tech entrepreneur ambitions were cultivated at AOL when he was hired at 11 years old, started his startup in May 2013 with $400,000 of his own money and later raised $2.1 million from notable angels, such as Gil Penchina and Scott and Cyan Banister. He opened up the service in the fall of 2013 with 20 therapists in the LA area, it's about the amount that he needs to open up in each city.

In order to recruit the thereapists, he visited massage schools, giving speeches about how the students could work for themselves on his platform and make $70 per hour vs an average of $15 an hour at a parlor. Each massage costs a flat fee of $99 for an hour massage, $139 for 90 minutes, or $169 for 120 minutes for Swedish, deep tissue, sports and pre-natal modalities. There's no varability in the pricing and the tip is included, said Kauffman. Therapists receive about 70% of the massage fee, and Soothe keeps the rest.

Since inception, Soothe has conducted tens of thousands of massages, said Kauffman. They also have 1500 therapists, who are hand-picked, background checked, interviewed for 90 minutes and tested by having to give massages to the local recruiter (fun perk for that guy!). Therapists are also required to have their own equipment.

Kauffman wouldn't disclose how many clients, nor the average number of massages a therapist gives in a day or week. He did say, however, that they've averaged 20% month-over-month growth in revenue in 2015.

Today, Soothe is in 12 cities, but he's looking toward doubling to 30 cities, which will be mainly in the US, but also in Canada and Europe. Going forward, he's looking to be the biggest massage shop, topping Massage Envy, which Kauffman noted generated $1.3 billion in revenue in 2013.

That's a nice goal to aspire to.