Alphabet, run by Larry Page, will include Google and its other properties, including YouTube 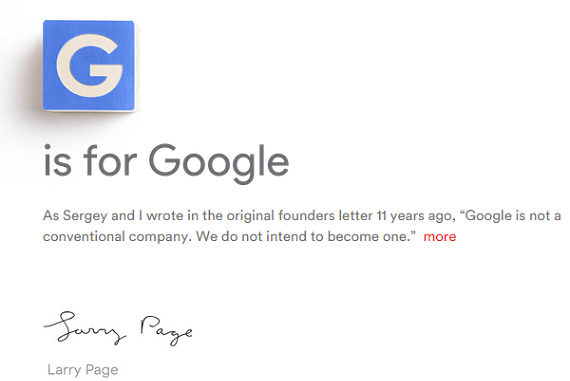 If you asked someone to describe Google as a company, I bet that would be hard to do, simply because it's so many things at once. Ostensibly its a search engine, but its also a video player, a health company, a car company, a mobile user interface, a browser and a million other things.

Google seems to have realized that all of this had started to become a big ungainly, so it is restructuring the company, putting all of its assets, Google included, under a new umbrella called Alphabet, it was announced on Monday.

The company will be heading by Google CEO Larry Page, with Google co-founder Sergey Brin as its president.

"We’ve long believed that over time companies tend to get comfortable doing the same thing, just making incremental changes. But in the technology industry, where revolutionary ideas drive the next big growth areas, you need to be a bit uncomfortable to stay relevant," Page wrote in a blog post.

Basically what this means is that, instead of calling everything Google, each division will its own separate company that all report to Alphabet. So Page will no longer be CEO of Google; that role will now be going to Sundar Pichai, the former head of Android, Chrome, and Apps.

"What is Alphabet? Alphabet is mostly a collection of companies. The largest of which, of course, is Google. This newer Google is a bit slimmed down, with the companies that are pretty far afield of our main Internet products contained in Alphabet instead," said Page.

"Fundamentally, we believe this allows us more management scale, as we can run things independently that aren’t very related. Alphabet is about businesses prospering through strong leaders and independence. In general, our model is to have a strong CEO who runs each business, with Sergey and me in service to them as needed."

YouTube, for example, will continue to be run by Susan Wojcicki. The company will report on each segment of the business by the fourth quarter of this year, while Google financials will be provided separately than those for the rest of Alphabet businesses as a whole.

Google, however, will no longer be a publicly traded company, and will be be replaced by Alphabet. Not to make this confusing or anything, but shares will continue to trade on Nasdaq as GOOGL and GOOG.

Btw, take a guess as to what Alphabet's URL is. Yup, its: abc.xyz.

Investors are certainly quite happy about this news as shares of Google (when do we start officially called it Alphabet?) are up 5% in after hours trading, or $33 a share, after having fallen 0.19%, or $1.25, to $663.14 a share during regular trading on Monday.

"For Sergey and me this is a very exciting new chapter in the life of Google -- the birth of Alphabet. We liked the name Alphabet because it means a collection of letters that represent language, one of humanity's most important innovations, and is the core of how we index with Google search!" said Page.

"We also like that it means alpha-bet (Alpha is investment return above benchmark), which we strive for! I should add that we are not intending for this to be a big consumer brand with related products--the whole point is that Alphabet companies should have independence and develop their own brands."

There are obviously some questions to be asked here, including when this restructuring be completed and how many different divisions will live under the Alphabet umbrella. VatorNews has reached out to Google for more information. We will update this story if we learn more.