The company will deploy 20 satellites, for the first network of commercial weather satellites 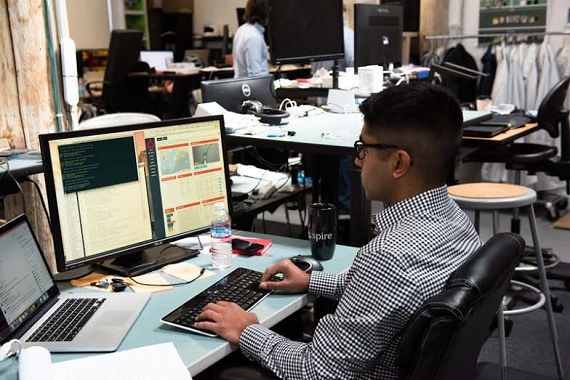 In the last few years we've seen a lot of companies talk about "the next five billion," meaning all of the parts of the world with low Internet connectivity. What they are talking about are countries in Asia, the Middle East and Africa, where people live. There's a large part of the world that is forgotten though: roughly 71% of it, a.k.a. the parts covered by massive amounts of water.

Now, you might be wondering: why would we need to do that? Because, by getting data on whats happening over the water, it can impact nearly every industry on the planet.

The next question is, who is going to do this? Spire, a satellite-powered data company, wants to be the solution. And it just raised a $40 million Series B round of funding to do it

The round was led by Promus Ventures with participation from new investors Bessemer Venture Partners and Jump Capital, as well as existing investors RRE Ventures and Lemnos Labs, among others. To date, Spire has secured just over $80 million through three rounds of funding.

Founded in 2012, Spire is, a satellite-powered data company, that gathers data on parts of the globe not normally covered by satellites. The company’s satellites employ advanced software defined radios to collect global remote sensing data with a focus on the three-quarters of the Earth that is covered by oceans or considered remote. The current generation of Spire satellites focus primarily on weather tracking, climate science, global supply chain monitoring, and broader maritime domain awareness.

"The problem we are addressing is the fact that, today, connectivity is about person to person and point to point. You can have a Skype conversation with someone halfway around the world with no problem. But the reality is that all connectivity only covers a small portion of the planet as a whole," Chris Wake, Head of Business Operations at Spire, told me.

"They are areas covered by land and heavily populated. We focus on covering the three fours of the planet covered by water, and other remote areas."

By gathering this data, it can be used in a myriad of different industries, with numerous applications, including illegal fishing, trade monitoring, maritime domain awareness, insurance, environmental impact, asset tracking, search and rescue, and piracy.

There are two specific use cases that Spire currently focuses on: commerce and weather. Not only does 80% of all global trade make its way over water, but if we could better track weather patterns it would affect nearly every industry on the planet.

"We started to look at truly global systems, which don't have the same level of connectivity. The first was very evident: maritime and ship tracking," Wake told me.

"The problem is that there is no clear understanding of where these ships are, and there are billions of dollars worth of goods out there at any point of time. We have better tracking on a UPS package than Tesla or Apple does on their goods being ship."

With its satellites, Spire is able to provide highly accurate coverage over the ocean, so that every commercial ship is tracked, and that information can be updates every hour, rather than every six hours or only once a day. This can have a huge impact on decisions that need to be made quickly regarding goods that are being shipped.

The other big use case is weather, which actually ties into the first use case.

"Weather impacts everything, from  what I chose to wear this morning, to why one particular company would ship to Portland than to Shanghai. It impacts global supply chains, insurance companies, shipping companies," said Wake.

Spire owns and operates its own satellites, and then sells the data to its customers, which can range from governments to large multi-billion companies to small data aggregators and hedge funds. For example, a government might use the data to understand port and maritime activity around its borders, as well as for security, search and rescue, and economic exclusion zones.

So far, the company has only launched four satellites, but will use this funding to deploy another 20 between now and the end of the year. Then it will launch a new one every month.

The funding will also go toward expanding the team. The company just opened a European office in Glasgow, and also has an office in Singapore, which, along with its headquarters in San Francisco, gives it offices around the globe. It has over 50 employees now and has plans to hire another 50 in Glasgow over the next couples of years

"It's all about finding the best people that we can. We almost always find more uniqueness and value from people with non-traditional backgrounds, like the gaming industry. They tend to be very solid programmers, with great technical expertise, and they are used to hard and fast deadlines, as well as tough technical challenges they have never been tackled. They work in the lower levels of programming languages," said Wake.

Launching satellites within the next year is very important, because that means that the company will not only be the only commercial weather company with satellites in orbit, but they will allow spire to cover the impending 2016 Weather Gap.

"The U.S. government recently come out with a report from the GAO that focused on the fact that satellites up today are coming up on their end of life. They are wonderful machines, and theyput all this money into them, and they do phenomenal things, but they are starved for data," said Wake. "Raw data has not kept pace with innovation in forecasting models. For us, the big value of 2016 is that we are the only weather provider with satellites in orbit. That gives us more raw data to fill the gap, and more data to take them beyond what they are doing now."