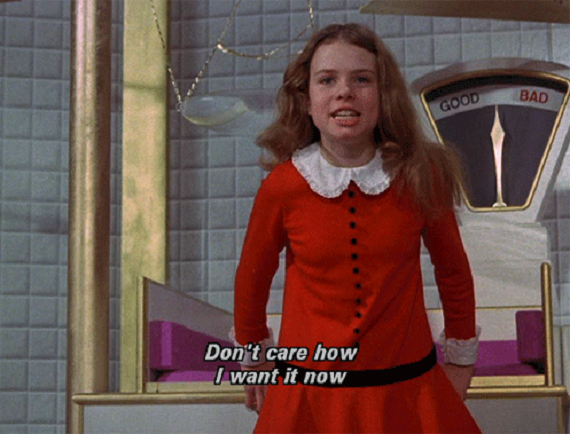 In the last few years, on-demand has gone through the roof. It's actually getting to the point where, frankly, maybe people could actually stand to wait a little bit longer for things. We don't want everyone to get spoiled, do we?

The most well-known company in this space is probably Uber, and its success, and ability to raise unbelievable amounts of money, has lifted the entire on-demand industry, according to the On-Demand Industry Trends Report from CB Insights and the On Demand Conference, released on Thursday. 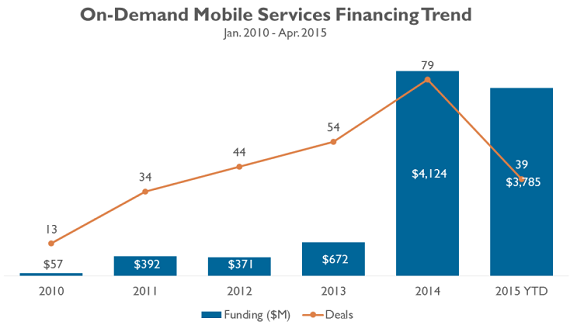 In fact, the first quarter of this marked the highest quarterly funding total on record, as on demand companies raised $787 million across 22 deals. On-demand mobile companies raised over $500 million in three of the past four quarters each, without counting Uber, as the company tends to skew the results.

Uber, of course, has been the driving force behind all of this growth in the on-demand space, with around $6 billion in funding. How much is it actually throwing off the results? Consider this: in all, $9.4 billion has been raised across 263 deals since 2010; when Uber is taken out of that equation, that number drops down to just $3.89 billion across 250 deals.

Even more impressive is that Uber raised 39% more funding than all other on-demand services combined in 2014. All those other companues raised $1.7 billion together, while Uber raised a couple of $1.2 billion rounds on its own. 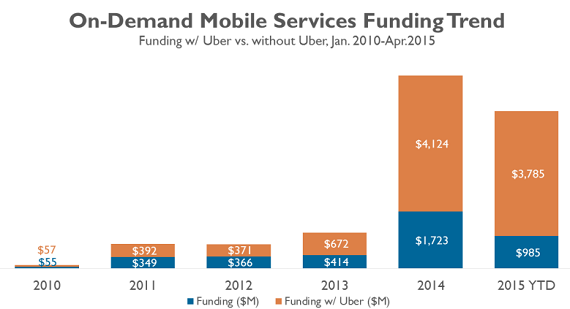 Mid-stage deals, meaning Series B and Series C together, took a combined 29% of deals last year. 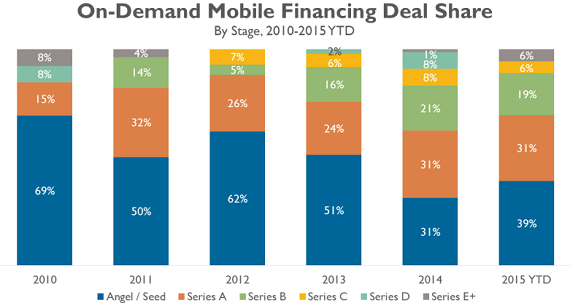 The average on-demand Series B for on-demand companies, which was  spiked by a series of deals worth $30 million or more, is $36.7 million. The average Series B deal size for all other companies is less than half of that, at $15.3 million.

The report also took a look at the most well-funded on-demand companies. Coming out on top is Uber, obviously, with an absiolutely incredible $5.51 billion raised. After that, it's not even close. No other company in this space has even raised $1 billion.

Uber's biggest rival, Lyft, comes in second with $862.5 million, followed by Airbnb with $794.8 million, Instacart with $275 million and, rounding out the top five, Eventbrite has raised $197.8 million in venture funding/..

With the rise of the amount of money going into these companies, so have the number of investors. In 2010 there were fewer than 20 VC investors who had done a deal in on-demand mobile services. At the end of April 2015, that figure hit 198.

SV Angel has been the most active VC in on-demand startups over the past five years, while Andreessen Horowitz is the second most active, investing in companies like Caviar, Lyft and Instacart. First Round Capital rounded out the top three.

The rise of mobile has made the rise of on-demand service possible in a way it never could have been before. People want what they want and they want it now.