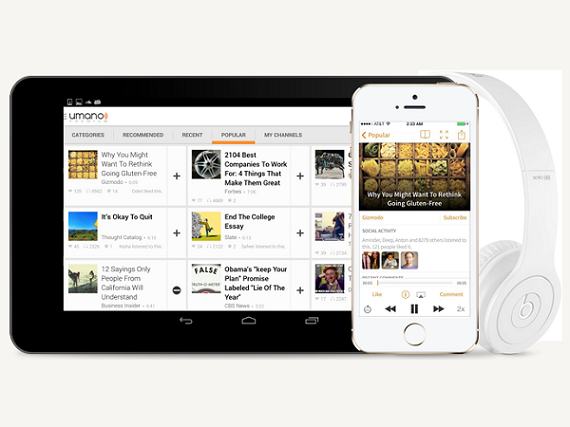 As much as enjoy reading, I just don't have the time to do much of it these days. Between work and everything else, it gets harder and harder to really be able to sit down and stop everything to read. That is why I've started to love audiobooks. I listen to them whenever I walk anywhere, meaning that I can get two things done at once.

It would be cool if I could do the same thing with articles online. There was a service that did just that, and I never knew it! And now it's going away forever.

The company was called Umano, and it has just been acquired by Dropbox, it was revealed in a blog post from Umano on Tuesday.

"We’re thrilled to announce that the Umano team has joined Dropbox! Nearly three years ago, we had a vision to make content more accessible on mobile. Since then, we’ve helped millions of people become more knowledgeable and productive in today’s rapidly evolving world," the company wrote.

Umano provided its users with a curated selection of articles read by voice actors. Users get article recommendations based on their listening history, as well as the ability to build playlists and download articles for offline listening.

Categories of articles that would be narrated included breaking news, business, entertainment, for women, health & fitness, science and sports. The app also allows writers to narrate their own content through the service, access analytics tools to track engagement and earn money.

No financial terms of the deal were disclosed, but it was revealed that Umano will be shutting down in 30 days, on June 12th. All annual Premium subscribers have those 30 days to request a refund for the remainder of their subscription.

It was not revealed how many members of the Umano team will be joining Dropbox, if the technology is being integrated into the company or what the team will be working on at their new company.

"We’re excited to take that experience and work with Dropbox to help people get more done together," is all the company said.

A Dropbox spokesperson would not comment further on the details of the acquisition. VatorNews also reached out to Umano for further comment on the future of the two companies, and we will update this story if we learn more.

Founded in 2012, Umano raised a $1 million seed round of funding in July of 2013, from Birchmere Ventures and Digital Garage, with participation from Karl Jacob and angels including several Google employees.

This is Dropbox's third acquisition of 2015 so far. The company earlier bought cloud storage provider CloudOn, and also acquired Pixelapse, a place to share designs and work.

The news of the Umano acquisition was spotted by Venturebeat earlier today,

CloudOn provides you the files you want and the applications you need on the devices you love - all in a single workspace.

CloudOn is revolutionizing the world of mobile productivity.

The way we work is changing. Increasingly connected social networks, more versatile mobile devices and the unprecedented power of the cloud promise the opportunity for increased productivity. Unfortunately, clashing technologies limit these opportunities which defeats the purpose for why these things exist.

That's not cool. And, we've decided to intervene.

With a pioneering, user-focused platform, CloudOn is making good on this promise of productivity. We are breaking down the silos between technology and people, so an already-smart device becomes brilliant -- giving you the chance to realize your own potential for productivity.